Everything Everything at Bowery Ballroom: A LocalBozo.com Concert Review 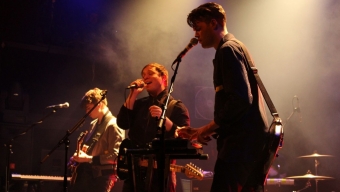 On the heels of the January release of their second studio effort “Arc,” British indie band Everything Everything met a sold out crowd of their New York City fans within the intimate confines of the Bowery Ballroom on Monday night. After a successful show at Williamsburg’s Brooklyn Bowl just days earlier, the band seemed genuinely ignited by the passionate Manhattan audience from the moment the four piece outfit took center stage.

If you’re unfamiliar with Everything Everything, you’re certainly not alone, despite the band’s penchant for performing live and a reputation that seems to be generating more and more buzz with each passing day. The band sports a distinctive blend that meshes high pitched- almost falsetto level vocals- with a kind of synth beats that brings us back to the days of 1980s pop music. But labeling them in that regard would do the band and their fans an injustice, because of the fact that the music that they are creating just seems to be so completely unique.

Backed by a collaborative pink and purple infusion of lights behind them, Everything Everything pulled out all the stops during a 16 song set that combined all of the signature elements from their first two albums. Opening with cuts like the haunting “Undrowned” and “Torso of the Week,” the band’s different pitches of harmonies worked brilliantly between bandmates in unison while their steady mix of guitar streams and infectious keys delivered their brand of slow-building melancholy rock that indie fans tend to salivate over. And fans lucky enough to be inside of a sold out Ballroom on this night certainly did.

While tracks like familiar single “Kemosabe” revved up an already surprisingly bouncy crowd, frontman Jonathan Higgs’ exceptional work on a rousing version of “Duet” blew the roof off the joint. The catchy, slow building soft melody and isolated instrumentals built toward an intense all out rock breakdown, with much of the standing room only floor jumping along to Michael Spearman’s pronounced drum beats, as the rest of the band egged us on. Other highlights included the stop and start energy of “Sufragette Sufragette,” the blistering bassline heavy “Cough Cough,” and the funky, jazzed up “MY KZ, UR BF.” The audience meanwhile, had a hard time keeping it together as the evening drew to a close with songs like “Radiant” and a poppy rendition of “Don’t Try” leading to a dance party of sorts as the show reached its conclusion.

Everything Everything may not be for everyone. But their musicianship and creativity in experimenting with a cavalcade of different sounds is as undeniable as their successes to date thus far in their still budding journey. Any fan inside of a sold out crowd at Bowery Ballroom on Monday night will agree- this is likely to be just the beginning for rock’s next big indie.