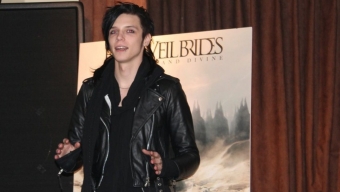 Hollywood and it’s infamous Sunset Strip unleashed some of this writer’s favorite rock acts from the 1980′s. These bands embodied pure rock decadence while carrying an arsenal of killer tunes to launch them into the stratosphere of stardom. Yet more recently, bands of this larger than life ilk seem to now sit in an indefinite state of hibernation. One of the bands at the forefront of a current rock music resurgence is the collective Black Veil Brides. And since 2009, these men in black leather, hair and face paint, have given a whole new generation of fans a reason to raise their horns high and proud into the air.

The Brides’ 2011 album “Set The World On Fire” showed how seamlessly they could blend grinding metal guitars, arena rock and ballads together, garnering them plenty of mainstream rock attention. The success of the album and the band’s rapid self promotion skills sent them across the globe touring relentlessly. Back here in the states, the group is a mainstay on popular summer outings like the unstoppable train that is the annual “Van’s Warped Tour.”

On January 8th, the boys in black will release “Wretched and Divine: The Story of the Wild Ones,” which may be their most complex and rewarding album to date. This work, which could easily be described as a concept record, stretches to nineteen highly layered tracks creatively detailing introspective and poignant feelings of fear and paranoia, amongst a sea of other emotional concepts. And even though the album doesn’t officially drop for a few more weeks, twenty lucky diehard fans were given the rare opportunity to hear “Wretched and Divine” in it’s entirety on Wednesday night at the Universal Records offices, right here in New York City. Once the album began to play all in attendance fell silent in order to hear every vocal and tasty riff. And for nearly an hour we were treated to an audible trip through the bands psyche. Each track provides a unique twist, with nothing repeated, and we are pleased to report that the album sounds great. The upcoming standout tracks include: “We Don’t Belong,” “Devil’s Choir,” “Nobody’s Hero,” and the surefire breakout single, “In The End.” Once the album concluded we saw smiles instantly transfix on each of the black lipped and leather wearing fans showing how much they loved the experience. Directly after the listening, the fans were treated to a five minute preview of the companion film “Legion of the Black,” featuring the band and a fully fleshed out story. But in the end the real surprise for the fans came storming from the back doors. Black Veil Brides’ front man Andy Biersack came out of nowhere to the joyous shock of the mostly female hardcore fans. Biersack hit the listening party with a blazing smile on his face, joking with the crowd, taking questions from those who were actually able to catch their breath and of course signing tons of autographs. The LocalBozo crew was fortunate to sit down with Biersack after this exciting fan encounter to discuss the upcoming album, its structure including guest appearances, and their subsequent tour. Enjoy the interview and be sure to catch Black Veil Brides when they hit New York City’s Best Buy Theater on January 25th!

LocalBozo.com:  The new Black Veil Brides album “Wretched and Divine: The Story of the Wild Ones” comes out on January 8th. But one must look first to 2011′s “Set The World On Fire” and songs like “Fallen Angels” which were epic. Yet on the new album you guys brought it to a whole new level. Please give us some insight into the process the band went through to make this all happen so cohesively and just bringing in a ton of instrumentation like violin, effects and of course plenty of haunting vibes.

Andy Biersack:  You know, I think we wanted to do something that was on an entirely different scale. It was something completely different then we have ever done before. So the importance of playing stylishly with the sonic level of the record was very cool. It was something we have never done before, you know? We had to relearn the way we write songs, because we wanted to involve a lot of orchestration and soundscapes. While using instrumentation we have never used before. It was definitely a difficult learning curve to get used to that stuff because it was self imposed. We wanted to do it so we knew we had to learn it to do this. It turned out great and we’re really proud of it. I think we wanted to avoid making a follow up record to our last record. We wanted to do something that was it’s own piece, that could stand on it’s own and be it’s own entity in itself. And I feel like we succeeded in that.

LocalBozo.com:  With nearly twenty songs on “Wretched and Divine,” it can easily be seen that this was a gigantic undertaking between an immense amount of writing and orchestration. Yet throughout the overall “story” featured throughout the record there exists these mini bookend moments as seen on songs “Done For You” through “Lost It All” (Tracks 14-16) where you start with a ballad and end with one. Were these singled out departures a premeditated choice?

AB:  When we first started writing the record it was all based on a short story I had written. This story of the “Wild Ones,” which I wrote on a flight back from Europe. It was just an idea I had and not something we were definitely going to make a record out of. But I loved the idea of involving this comic book-esque “1984″ “V For Vendetta” kind of story into what we are doing. So we started making a record with that as the intention. Let’s make this concept record. Let’s do this (said the band). And very quickly within this process we set out to make a concept record we were cutting ourselves off from writing great songs. You start to bog yourself down with, “Okay does this work within the context of the story?” And “Does this lyric work here?” So we decided to take off the idea of the concept record for a few weeks and we just wrote. We wrote as many songs as we could. What we kept finding was no matter what we did, we kept referring back to the story. And it was just naturally happening. We were so naturally involved with it. That even when we were intentionally not trying to, we were still writing about the story. And so at that point we realized if we do it more casual and just write as we would write, the story is going to come through. And when we completed with our writing, we saw how all of these aspects fit into place.

LocalBozo.com: In addition to the new record having a very ambitious concept there are also guest artists featured such as Bert McCracken from The Used. Was his involvement based off of an existing friendship or did you just feel that he was a good factor to bring in?

AB:  I met Bert through John Feldmann, the producer of our album. John was very instrumental in the beginning of The Used’s career, producing their first record and broke them. So they are very close friends. Bert and I met and got to talking about literature and different stories. We began to chat about the concept of the album and he really liked it. And bringing him into the fold was as simple as, “Hey want to come and sing on the record?” There was a song that I thought was perfect for him to do a high harmony on the verse with his natural singing voice to make it sound more manic. It gives the song more aggression. The entire process was simple. He just came in one day, finished it in two or three takes and did an awesome job. And from all of this we’ve become friends.

LocalBozo.com: Black Veil Brides hit the road on a major tour beginning January 4th in Las Vegas. Who do you guys have filling the opening spots along the way and why?

AB: William Control(Aiden), who does the voice of “F.E.A.R.” throughout the new record will be joining us on tour first and foremost. But when it comes to younger, fresh bands opening up for us it reminds me of when we were just starting out. Whenever we wanted to open up for big bands, we never got those shows. My kind of band would never get shows. The club owners would have their favorites, you know the, “Bar Band” that played the hits that everybody liked. We haven’t had local bands on our shows in years since we first started touring. So I decided that I wanted to give an opportunity for young, local bands from every city that we roll to open up the show. They can sell tickets, etc. The “Brides” will be playing a two hour long show, so there will be a lot of time before we play. So, in every city we open it up to bands that are similar to us or bands that are influenced by us. If they are interested in playing with us they will enter into a “Battle Of The Bands” type contest to try and get an opening slot shot. Ultimately it will give them the exposure we never got coming up.

LocalBozo.com:  Andy, thank you so much for your time. Please feel free to leave your fans, new listeners and the readers of LocalBozo.com with anything additional.

AB: Honestly, I am excited for people who have maybe never heard of the band to hear something like this. It’s such a community that our fan base has and the people who support the band. The fans mean absolutely everything to us and we do so much with them, and involve ourselves with them so much. It will be interesting for people who have never listened to the band before to pick up this record and hear what it is that all the kids covered in paint do.