An Evening with Chris Cornell: A LocalBozo.com Concert Review 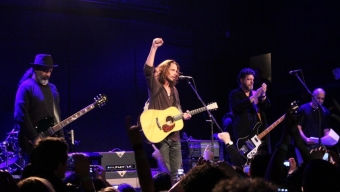 An Evening with Chris Cornell: A Benefit for the Victims of Hurricane Sandy
Bowery Ballroom, New York, NY
November 12, 2012

Concert Review: An Evening with Chris Cornell at Bowery Ballroom

For some arbitrary reason among my small group of amateur rock aficionados, describing a band’s lead singer as a ‘riveting vocalist’ has always been a bone of contention that’s led to hours upon hours of back and forth discourse as each of us would try to top the previous choice with a selection deemed to be ‘more riveting.’ But after witnessing Chris Cornell in person for the very first time on Monday night, all arguments can now officially be put to rest. In a fitting benefit for victims of Hurricane Sandy which pulverized so much of our beloved New York and New Jersey, the Soundgarden frontman spent the better part of two and a half hours exploring the farthest lengths of his beautiful singing voice to the ultimate delight of a sold out Manhattan audience. And in the intimacy of the Bowery Ballroom, fans were treated to a show equipped with more substance than style, stripped down and raw, and in a word- incredible- all at once.

Today officially marks the release of Soundgarden’s latest album “King Animal,” the band’s first in sixteen years. And accordingly the tireless Cornell paired a “Live on Letterman” performance with his full band at the legendary Ed Sullivan Theater in Times Square, before descending upon the diminutive Ballroom right after, never once wavering from atop his perch as perhaps the finest rock singer of our time. At shortly after ten pm, and after some technical issues that delayed the show’s start, Cornell modestly strode out to center stage, standing in the spotlight holding his acoustic guitar in hand. Time and again throughout the show, the singer would effusively bestow praise upon attendees, estimating that the singular performance had raised upwards of $40,000 in relief to the Hurricane’s nearby victims. While the banter was relatively minimal, the frontman managed to let his talents do the brunt of the talking on this night.

Billed as “An Evening with Chris Cornell,” the performance played out as a greatest hits setlist for the prominent frontman, recanting each step in his illustrious career. With something close to a set filled with 26 songs, putting the entirety of the live show in perspective is something akin to verbally describing a song without sound- what is written here simply cannot do Cornell sufficient justice. But the lengthy show was not without its more unforgettable moments, highlighted by six incredible songs featuring Soundgarden’s complete lineup as the evening’s surprise guests. “Black Hole Sun” may have drawn the biggest reaction from fans singing along, but it was “Outshined” that was absolutely captivating to watch in this setting, in such close proximity to the pioneers of grunge. “Fell on Black Days” and “Black Saturday” were similarly delicious licks chewed up by an already excitable New York crowd.

Cornell also touched upon some of his earlier solo work with 1999’s “Can’t Change Me,” and 2007’s “Carry On,” noticeably left off of the album release with the same name. But without his bandmates by his side, it was Temple of the Dog’s “Wooden Jesus” and more specifically, “Hunger Strike” which had fans searching the space of the stage awaiting Eddie Vedder’s arrival. Although the Pearl Jam frontman never emerged, the rabid fans were more than happy to take over his duties on backing vocals. The set was also not without its splendid selection of covers, which Cornell pulled off wonderfully. Bruce Springsteen’s “Atlantic City” was mournfully dedicated to the storm caused pains in New Jersey while “Thunder Road” received a dedication to victims in Staten Island. Meanwhile, The Beatles’ “A Day in the Life” and the iconic harmonies of John Lennon’s “Imagine” were both inspiring and poignant at once. And despite a preponderance of already notable songs, the addition of Audioslave tunes “I Am the Highway,” “Doesn’t Remind Me,” and “Like a Stone” were all welcomed into a setlist rife with so many memorable numbers.

There’s simply no greater compliment to offer a performer than to assert them with ‘must see’ status. And while that’s normally a widely abused cliché, it doesn’t always jive with an honest assessment of an artist’s talents. Whether on stage with his long time pals or with his lonely six string guitar, his riveting performance reminded us of his immense gifts as a musician and as a frontman. For two and a half hours on Monday night, we were treated to a bright light in the midst of a storm’s damaging consequences as Chris Cornell, the virtuoso vocalist, treated us to one of New York City’s finest musical performances of 2012.