Down at the Best Buy Theater: A LocalBozo.com Concert Review 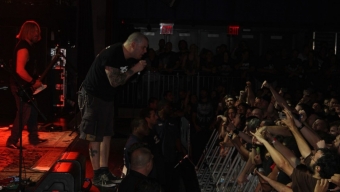 Formed as a side project in the early 1990′s, Down is comprised of several key components from different previously successful metal outfits. But what’s perhaps most intriguing about this band is their unwavering commitment to each other, despite more lucrative ventures externally. But their unique identities aside, each musician’s talents compliments the sum of the band’s parts- the bluesy southern inspired guitar riff duelings of Pepper Keenan (Corrosion of Conformity) and Kirk Windstein (Crowbar), the unabashed stick crushing drum beats of Jimmy Bower (Eyehategod), and the unmistakable vocals of frontman Phil Anselmo who alternates between having a blast onstage and pacing back and forth in aggresive fashion. Although the band members may be better known by the music they’ve created elsewhere, collectively Down is as good as it gets. The band’s ninety minute set on Friday night at the Best Buy Theater was a testament to that.

The band emerged with their first full length album in the fall of 1995 with the now classic Nola record, an inspired set of tracks that brings to light each musician’s sublime talents. With at least two relatively brief hiatuses and just two full length releases since then which have- to a degree, been met by underwhelming critical responses, Down is set to release a series of six song EPs over the next few years; the first of which, “Down IV Part I- The Purple EP” was released in September. The band members nonchalantly strutted out toward the stage to a massive ovation from the crowd of Manhattan Metalheads, grabbing their gear before taking their slotted spot on stage.

Anselmo asserted himself from the start with his trademark deep voice commanding a sea of excitable New York City fans. The extended intro and haunting guitar licks of “Eyes of the South” quickly amplified the already energetic crowd, before the band’s latest single- the slower, but pulverizing “Witchtripper” managed to make our necks ache from headbanging by just the band’s second song. In the frontman’s shadow, Keenan’s fast moving hands danced along his frets with surgical precision. The relatively reclusive guitarist is blasé as they come on stage, managing to make even the most manually intensive guitar riff look easy with his carefree demeanor.

The setlist ran the gamut of songs from each of the band’s albums, and understanding the necessity to satiate the hungry fans gathered around the stage and in the active moshpit, Down performed every number that you’d hope for. With three new tracks, highlighted by the bouncier “Misfortune Teller” closing the main set, Down paced the set with songs like “Lysergik Funeral Procession,” and plodding, pounding versions of “Ghosts Along the Mississippi” and “New Orleans is a Dying Whore,” all from 2005’s “Down II.” But hearing the incredible live versions of cuts from the band’s debut album was the highlight for these ears. Criminally underrated tracks like “Lifer,” “Losing All,” and “Temptation’s Wings” were downright awesome, topped only by the band’s encore of the legendary “Stone the Crow” and show closer “Bury Me in Smoke,” a sludge metal anthem that best encapsulates Down’s trademark mixture of passionate screams, inspired lyrics, and distinctive guitar work.

Last month, Phil Anselmo was joined by other rock musicians at the Gramercy Theatre for an evening dubbed ‘Metal Masters,’ and although his performance on that evening was remarkable, there’s something even more special in watching him perform in a place where he truly feels at home. And whether that’s in New York City or down in New Orleans, as long as he’s got the rest of his Down bandmates standing at his side, wherever he takes the stage geographically, this band is clearly where his heart is.