Tremonti at the HighLine Ballroom: A LocalBozo.com Concert Review 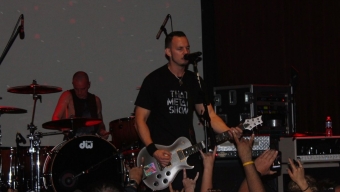 It’s much easier to dismiss Mark Tremonti as being simply a part of a successful music machine than it is to respect him for being the vital cog that keeps the machine working. Laying down the lead guitar for bands like Creed and Alter Bridge, Tremonti’s work is already well established on some of the most anthemic rock songs of the past fifteen years and yet despite millions of albums sold and millions of dollars in the bank, there’s a work ethic and a creative drive that refuse to allow him to rest. With that in mind, after years of planning and recording finally finished, the axeman released his first ever solo project titled (you guessed it) Tremonti, with the help of longtime friend Eric Friedman and former Submersed (Tremonti produced their debut album) drummer, Garrett Whitlock. Hot off the heels of lead single “You Waste Your Time,” Mark Tremonti led his band into New York City’s HighLine Ballroom Wednesday night, for just the second performance with this lineup of musicians. Performing every song from his debut album “All I Was” a jam packed New York City crowd ate up every second of it.

Watching Tremonti take centerstage, it’s almost like you don’t believe the charade. Escewing the prototype, the guitarist doesn’t sport sleeves of tattoos or ratty long hair. His clean cut approach to making heavy rock, but not quite metal music, is a refreshing change of pace from the cookie cutter bands that emerge every other week, with far less established reputations. Outfitted in Chuck Taylor lace-ups, skinny jeans, and a black ‘That Metal Show’ t-shirt (a shout-out to VH1 host Eddie Trunk, who introduced the band), Tremonti re-arranged the album’s songs in a fun hour plus setlist to energize the crowd on hand- most of whom, unsurprisingly, had managed to learn every word already. Interestingly enough, with just days to spare before the commencement of the tour, Tremonti tabbed Wolfgang Van Halen to be the band’s touring bassist, replacing Brian Marshall (also Creed, Alter Bridge). But the 21 year old virtuoso missed nary a note and slapped his bass to near perfection alongside Tremonti’s wailing guitar riffs.

The show itself managed to have a big show feel around it, despite the band’s collective inexperience performing together. Even the guitarist’s buddies from Sevendust, Eve to Adam, and Like A Storm filed in with the rest of the fans, as a show of support for the new project. Tremonti capably held his own as a frontman with his vocals shining equally as bright as his typical killer guitar playing. But as the band’s focal point, his stage presence still leaves something to be desired, without Myles Kennedy or Scott Stapp parading around or gyrating to his right. That said, the guitarist does know how to author some of rock music’s tastiest licks. From the pulverizing opening of “Wish You Well” to the head pounding “All I Was,” it’s easy to see that Tremonti’s gone to his darker, heavier side for this record. The crowd meanwhile couldn’t have been happier, getting closer to the vocalist during this intimate show than perhaps ever before. Main set closer “Decay” and the band’s finale “Brains,” which initiated the evening’s sole moshpit proved pivotal in establishing Tremonti the band as a standalone outfit far removed from the guitarist’s other projects. And one that perhaps with more time under it’s belt, could succeed the others as Mark Tremonti’s primary focus.