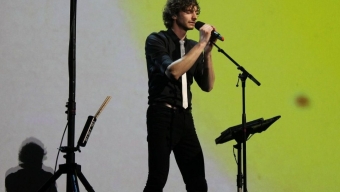 A beautiful late September evening was the setting at Williamsburg Park, equipped with its stunning views of Manhattan across the waterfront. The concrete floor of the outdoor venue would be filled with the feet of concertgoers traveling into Brooklyn on Thursday night for a live performance from Australian heartthrob Gotye, and his accompanying band of four backing musicians. The band’s ninety minute performance perpetuated the enigmatic frontman’s penchant for playing a bevy of different instruments, all while delivering his signature emotional crooning that brings live audiences to their knees.

Despite the massive success of 2011’s “Somebody That I Used to Know” here in the states in 2012, Gotye the artist, had actually released two studio albums independently previously. His recent success is a testament to his hard work, of which his live performances have become indicative. Showtime began on the earlier side with the stage lights illuminated to reveal Gotye in the background, pounding on percussion instruments while his bandmates reveled in the spotlight momentarily. His live vocals resemble a younger, more energetic version of Sting- melodically mellow and slow paced. Yet every pummeled drum beat sounds like it’s been meticulously placed and each is meant to mean something.

Taking the stage in a tight black button down shirt, skinny black jeans and a thin white tie, Gotye looked right at home in Williamsburg’s hipster-haven, with nary a curly twist of his mop out of place. Backed by a colorfully animated- and sometimes morosely depicted- screen show behind him, and a sea of bright white lights flashing sporadically down upon the band and their excitable fans, the soulful Aussie poured into funky, synth-laden tracks “The Only Way,” “Thanks For Your Time,” and “Dig Your Own Hole,” expertly alternating between keys and drums effortlessly. The singer also expressed himself soulfully through the bluesy “Smoke and Mirrors,” as well as cautioning the audience that the pace would be slowed even further with the relatively tranquil “Giving Me a Chance” and the measured “Bronte.”

The show as a whole was one part artsy performance piece and one part eye-catching animated showcase, coupled with the band doing their thing on stage. And all that said, it worked. The frontman as an entertainer is relatively laid back- stoic even- until he flashes a smile at the crowd, and paces around on stage to a pre-set instrument station to reinvigorate his audience. Noticing Gotye’s 1980’s influence in the simple arrangement of his music was transparent but creative in his utilization of experimental sounds and instruments to create beats laid over his sometimes haunting vocals. About an hour into the set, the vocalist prepped fans accordingly before launching into the single that made the term ‘Gotye’ a household name. And as the all too familiar opening chords to the song began, swarms of fans bumrushed their way toward the front of the stage, hoping to sing along with him in the absence of New Zealand’s Kimbra, who provides backing vocals in the studio version. As the catchy, likeable strums of the song progressed and Brooklynites all around us sang the chorus at the top of their lungs, we couldn’t help but appreciate the spirit of the moment.  But only time will tell if the unique artist Gotye can find similar success with his next few singles or whether he’ll end up being remembered as somebody that we used to know.