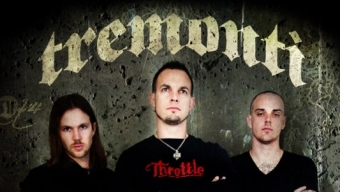 He’s wielded his six strings through some of the most anthemic rock songs of the past fifteen years. From the more mellow and melodic radio friendly Creed singles to the heavier thrashings of Alter Bridge, guitarist Mark Tremonti has been a principal and guiding member of both outfits- his vastly underrated guitar playing a revelation at each of the bands’ live performances. With the debut release of his solo album “All I Was” in July, his new three piece band under the moniker ‘Tremonti’ is now the latest in a line of infinitely successful rock ventures undertaken by perhaps the hardest working artist in music today.

Despite the core beliefs held by the most ardent of Creed fans, the band has been given a polarizing ‘Nickelback-ian’ distinction by most casual rock listeners- though few would admit to rolling their car windows up and singing songs like “With Arms Wide Open” and “My Sacrifice” as loudly and proudly as most certainly do. While Alter Bridge has managed to avoid similarly unfair criticism, the rock genre has drastically changed as previously successful artists have realized that finding audiences to entertain in a live setting has become increasingly more difficult. Not so however for Tremonti’s two (and now three) viable touring entities which, despite a shortage of music outlets for the genre, have found no such trouble in selling tickets and selling out their shows- a testament to the talents of the skilled axeman behind both rock outlets.

On Wednesday, September 12th Mark Tremonti brings his three piece act ‘Tremonti’ to New York City’s Highline Ballroom for just the band’s second live show, in a rehearsal setting of sorts. With support from Charm City Devils and with tickets at just $20, fans will be treated to the stylings of one of hard rock’s unheralded guitar virtuosos performing most if not all of the cuts from the band’s acclaimed debut album. LocalBozo.com was fortunate to sit down with guitarist Mark Tremonti for an exclusive interview. Listen in as we discuss the challenges of recording his debut album with two other full time bands going on at the same time, his excitement to perform a headlining show in New York City, putting together this band, whether we can expect to hear any familiar Creed or Alter Bridge songs live, and his plans for the remainder of 2012.

LocalBozo.com: Mark, thanks so much for giving us some time today.

LocalBozo.com: Mark, your first solo album “All I Was” was released back in July and was a project that was a long time coming. How much of a challenge was just finding the time to record this album with so many other projects seemingly going on at once?

MT: You know, it was actually pretty easy. We had a three month window when [Alter Bridge frontman] Myles [Kennedy] was out with Slash. I had a bunch of ideas just stockpiled and stuff and figured it was a good time to get together with a couple friends and record some ideas. At first it was just going to be a project and once we got going with it we got real excited about it and now we’re pushing it as much as we can. I’d come on and off a tour and just knock out bit by bit every time I had a break from a tour and finally got it done.

LocalBozo.com: Can you talk a little bit about how you put this band together?

MT: Well Eric [Friedman], the other guitar player in the band- he’s been a friend of mine for probably about 13 or 14 years. He’s one of my best friends. I’ve played him just as many ideas as I’ve played any of the other members of my other bands. So he was the obvious choice to join the band. And then Garrett Whitlock was a drummer in his band Submersed that I co-produced; I co-produced their first album years ago and he’s a very accomplished drummer. Great guy. Same kind of roots as I have musically and he worked out great and so we were just a three piece on the album.

LocalBozo.com: Now was the plan for you to handle the vocal work on this album all along?

MT: From the get go I decided to do the singing. Doing the solo record, I think a lot of people thought- me being a guitar player, it would be mostly a guitar driven record. But when I’m working, most of my time is spent writing vocal melodies and writing songs. And that’s what I’ve done all these years so I wanted the solo record to kind of be what I’m really about which is writing these vocal melodies and now actually just singing them.

LocalBozo.com: The first single “You Waste Your Time” is loud and it’s fast and it’s in constant rotation on rock radio, especially on Satellite radio. Was it a conscious decision to write some heavier music and how satisfied are you with the song’s reaction so far?

MT: You know, I’m satisfied with the reactions from fans for sure. Everybody’s been blown away by the response so far. The biggest challenge now is just getting enough people to hear it in the first place and hopefully, spread the word because they’re really enjoying it.

LocalBozo.com: If the opportunity presented itself, could you see yourself doing double duty with Tremonti as the opener for either Creed or Alter Bridge?

MT: You know, I had presented the idea of maybe Tremonti playing the summer festivals while Alter Bridge was over in Europe and my agent said it would probably be a bad idea, it’s just confusing to the fan base- you know, just try to keep it all separate.

LocalBozo.com: On Wednesday, September 12th, Tremonti is stopping locally at the Highline Ballroom in New York City with support from Charm City Devils. Talk about what it’s like for you to be headlining a solo show in the Big Apple after having played here so many times over the past decade with your other bands?

MT: It’s gonna be great. New York is always a place to get out there and get the media out there talking about the band. It’s kind of always the first step with each new project and it’s fun to be able to do it for the third time. I can’t wait; I’ve heard the venue’s a great great place. I’ve never played there and we look forward to it.

LocalBozo.com: Do you have any memories you’d like to share with us about performing in New York City over the years?

MT: Yeah, I remember traveling way back in the early Creed days. Getting in a van and going up to New York and seeing it for the very first time because I’d only seen it on TV. We were going up there for a big show with all kinds of record labels and radio promotion people so I was very nervous. I remember playing, gosh I think it was Brownies maybe, or something along those lines- just a few hundred people and meeting Bill McGaffey who then came on board and helped us promote the first Creed record.

LocalBozo.com: Mark, can fans expect any surprises in the setlist as far as any familiar Creed or Alter Bridge songs or is it just going to be solo Tremonti material with maybe some covers thrown in?

MT: Yeah, it’s gonna be all solo material. The Highline show might be a little early for covers because we’re coming straight off of a Creed tour right into the tour so we’re not going to have any rehearsals other than one show the night before. So as we’re on tour we’ll probably work out some cool covers.

LocalBozo.com: Yeah I get it- maybe add to the set as the tour rolls forward. Now you’ve got a list of dates that wrap in October- what are your plans for the rest of 2012?

MT: We’re gonna do the HardDrive Tour like you said, and follow that up with going over to Europe and hitting the UK, Italy, Holland, maybe a show in Germany. And then I think we’re putting together a Creed South American tour at the moment and then in January, get together with Myles and put together the next Alter Bridge record and hopefully get over there next summer to Europe to do all the summer festivals.

LocalBozo.com: Mark, you’re kind of in a pretty unique place in that you have two viable touring acts and now you’re emerging on this solo project. What’s that like for you as a musician just to reflect back upon all of the success that you’ve had and to be in this position where you have three bands that you can tap at any given time?

MT: You know, it’s great. It’s a little stressful sometimes, just working out the schedules between everything. It’s just a lot of moving parts. But the whole point of me doing all of this was to be a songwriter and to get as many songs out as I can and it’s great to have these three outlets. And I’m just happy that the first two bands- Creed and Alter Bridge- have done so well and I’m very proud of both of them.

LocalBozo.com: Mark, you’ve got as great a work ethic as anyone in music, and you’ve been so gracious with your time today. Is there anything else you’d like to leave for the readers of LocalBozo.com?

LocalBozo.com: Awesome. Fans, “All I Was,” the brand new album from Tremonti is available now wherever you buy your rock music. You can catch the band right here in New York City on Wednesday, September 12th at the Highline Ballroom with support from Charm City Devils and tickets are available now. For more information on the band and tour dates, check out marktremonti.com. Mark, thanks so much for your time today on LocalBozo.com, and all the best of luck to you with the new album and on tour.

MT: Great. Thank you very much.