Mumford & Sons at Hoboken’s Pier A: A LocalBozo.com Concert Review 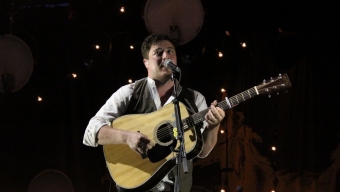 Concert Review: Mumford and Sons at Hoboken's Pier A

In the first of presumably many upcoming shows in the area, Hoboken’s Pier A Park enlisted the services of British folk rock outfit Mumford & Sons to christen the erected stage and surrounding space. Upwards of 15,000 ravenous fans filled the outdoor grounds for a glimpse (and for some, that’s all that could be seen) of one of the fastest ascending acts in music. Their catchy songs and collective harmonies warrant the crossover success that has been bestowed upon them, inching fans of Top 40 and pop more toward their unique blend of bluegrass, styled by the backing of banjos and percussion instruments. With the help of openers Dawes and Aaron Embry, the band’s 100 minute set would be a showcase of songs performed for the first time from upcoming album “Babel” (9/25) as well as the fan friendly sing-alongs from their critically and commercially acclaimed debut “Sigh No More.” Even with just one full length release under their belt, Mumford & Sons captivated the capacity crowd on hand like a bunch of seasoned vets.

Rumored day long thunderstorms made for an anxious afternoon leading up to the show’s open as pervasive rain drops had fallen throughout much of Wednesday. But as show time approached the skies managed to clear up, leaving behind a relatively cool summer night on the Hoboken waterfront with picturesque views of the Manhattan skyline. Shortly after quarter past eight, the band’s four principal members took the stage, collectively smiling out at the sea of people before them- not looking overwhelmed for even a moment. The band’s first ever concert in New Jersey would kick off their month long American tour, the sounds of which could be heard well beyond the confines of the Pier’s erected walls.

With several seconds utilized to take in the spectacle, the band opened up with “Lover’s Eyes,” from their upcoming release, followed by a rousing rendition of “Little Lion Man,” which the crowd was unapologetically waiting to explode for. The slowed down chorus during the live performance only served to further breed an audience hungry to be an increasingly vociferous part of the show, packed in front to back in some pockets and dancing like hipsters trotting around in the rain in others. In all, the band unveiled seven new tracks which were seamlessly meshed into the setlist surrounding songs from their debut. Eschewing the traditional drummer, frontman Marcus Mumford instead utilizes a sole kick drum from his mic stand for much of the performance, a rarity for a vocalist. Songs like “Winter Winds” and “Roll Away Your Stone” meanwhile, featured some of the band’s finest skills- creating creatively harmonized, drastic tempo changing, hand clapping, foot stomping folk numbers that you might hear at a backyard party. Or simply put- melodically inspired indie rock at its absolute finest.

Ripping through their catalog, the band would then encore with a horn section tribute to hometown icon Frank Sinatra with “New York, New York,” a moving rendition of Paul Simon’s “The Boxer,” and finally closing out with literal and figurative fireworks following arguably Mumford & Sons’ most well known hit “The Cave.” Colored sparks rang out overhead, nearly outdone by the applause of the Mumford faithful beneath, gazing up as the Hoboken sky quickly began changing colors. It’s hard to watch Mumford & Sons perform and not marvel at their collective talents. In a novel approach, the band never compromised their style to create a modish style of music, instead harnessing their abilities to produce their own inspired blend of songs, and waited for the paradigm to shift toward understanding them- rather than the other way around.