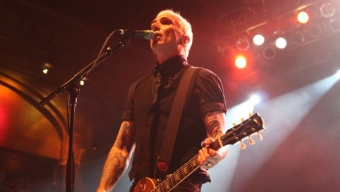 On Wednesday night, harsh temperatures from New York City’s second major heat wave brought on a rain storm drenching residents like wet dogs. Luckily, there was a cure for this wet July day, which came in the form of good old rock music. The prescription? The inaugural “Summerland Tour,” an all out celebration of 90â€™s mega-hit rock music performed by a lineup of the artists who put their stamp on the decade that was. With a traveling roadshow featuring rock favorites Everclear, Sugar Ray, Gin Blossoms, Lit, and Marcy Playground, it would be impossible not to enjoy this roster and find yourself singing along to nearly every song. And on a humid, raining evening, New York Cityâ€™s Roseland Ballroom would play host to this late 90â€™s nostalgic time machine.

With iconic rock tours like Aerosmith and Cheap Trick and Def Leppard and Poison touring the country, a late 90â€™s oriented run equally seemed to make sense. Co-founded by Everclear frontman Art Alexakis and Sugar Rayâ€™s Mark McGrath, Summerland is an experience that gives back to the fans and the artists in a mutually beneficial and raucously fun trip back in time. The two vocalists would also serve as the eveningâ€™s emcees, introducing each of the acts set to take the stage and indicating their importance to the genre.

With an early start time, fans were still filing into the Roseland Ballroom as Marcy Playgroundâ€™s abbreviated 25 minute set was just taking shape. Upbeat opener “Poppies” from the bandâ€™s 1997 self titled debut album proved pivotal in getting the party started. The three piece outfit sounded tight from the first note to last, recreating their initial and familiar studio sound led by vocalist John Wozniak. The catchy riffs and bluesy back beat paced a terrific live version of “Saint Joe on the School Bus,” a personal favorite of ours. With scant time for messing around, the bandâ€™s allotted time ended with a modern rendition of “Sex and Candy,” a decade defining hit single, which unsurprisingly, received the loudest ovation from the crowd on hand. While some define the band solely by their biggest hit, the bandâ€™s performance as the show openers proved them to be more than just a one-hit wonder.

If Marcy Playground lit the fuse for the evening, then California’s Lit dumped a gallon of gasoline on top of it. The Brothers Popoff- both A. Jay and Jeremy- led the energetic band onstage for their thirty minute set paced by all of their familiar radio hits and a few cuts from their latest release â€œThe View From the Bottomâ€ (June 2012). Performing with the same intensity and talents as the same group of guys we were catching in clubs some twelve years ago, the bandâ€™s infectiously catchy songs like opener â€œFour,â€ â€œLipstick and Bruises,â€ and the unforgettable â€œZip Lock,â€ proved a pivotal element to the overall quality of the show. In the grand scheme of things, Lit the band has become almost an afterthought, which is a shame considering the catalog of songs that theyâ€™ve produced and their immense musical talents performed on stage. Their hits from the late 1990â€™s served as a catalyst for much of the power pop meshed punk rock music thatâ€™s become in vogue a full decade later. Throughout the show, frontman A. Jay stalked back and forth on center stage aggressively, commanding the crowd to release as much energy as he had pent up inside. The crowd meanwhile reciprocated accordingly. Between jumping, headbanging, and light moshing the audience was loving every minute of the bandâ€™s set. The fun and pummeling no filler set concluded like a fireworks show with the raucous hit “My Own Worst Enemy,” leaving the crowd to do much of the singing themselves.

The turnaround time between bands was highly efficient as Alexakis and McGrath quickly returned to the stage to introduce alt-favorites, the Gin Blossoms. The Gin Blossoms were an interesting addition to a bill featuring bands who made their mark toward the latter part of the decade since they rose to prominence during the post-grunge period, producing music that was literally everywhere. The Gin Blossomsâ€™ Summerland set was a blow by blow recreation of this, and then some- with seemingly every song a familiar hit single from the mid-1990â€™s. Singer Robin Wilson took to the stage with a party vibe in mind, handing out white tambourines to exuberant fans in front of the stage. While many bands break up their set by mixing hits in with lesser known cuts, thatâ€™s simply not an option for the Gin Blossoms, with a 35 minute set that played like a greatest hits album. This was immensely satisfying hearing â€œFollow You Down,â€ â€œUntil I Fall Away,â€ and “Found Out About You” essentially in a row. From the front row against the barricade to the back and sidebars, the entire place was singing along in unison, with a look of joyous whimsy in their eyes harkening back to a decade that they remembered fondly. The jam-packed set finished off with the classics â€œâ€™Til I Hear It From Youâ€ and the unforgettable “Hey Jealousy,” followed by a raucous, lasting ovation from the New York City faithful.

It was then time for one of the co-hosts to leave his emcee duties and get to some rocking. Orange County favorites “Sugar Ray” took the stage next to a huge pop from the crowd. In keeping with the 90s theme of the tour, the band took the stage to the theme song from sappy 90s sitcom favorite “Saved By the Bell”- a very nice touch if we may add. Singer Mark McGrath came out dressed in an all-white suit which matched his unapologetic swagger. Looks and attitude aside, these guys were all about interacting directly with the crowd and it certainly appeared that everyone in the band made a pact to never stop moving on stage. Fan satisfaction was guaranteed with the early playing of favoritesâ€™ “Every Morning”, “Someday”, and “When It’s Over”. Yet the band didn’t rest on their laurels with major hits alone as everyone in the house got a brief yet awesome taste of Sugar Rayâ€™s hard rock days with “Mean Machine,” from the bandâ€™s 1995 debut “Lemonade and Brownies.” It proved that despite their penchant for writing successful pop songs, the band hasnâ€™t totally lost sight of their aggressive and raw sounding roots. Between songs, McGrath joked along with the audience, proclaiming â€œhereâ€™s the part of the show where I play guitar for no reason,â€ and singing along to tracks from the Beastie Boys, covering the Ramonesâ€™ â€œBlitzkrieg Bop,â€ and dedicating a song out to media personality Howard Stern on the recent passing of his bulldog Bianca. With the energy turned all the way up, it was time to close the show with “Fly,” played with extra hints of Southern California charm. In a fitting capper, the theme song from â€œThe Fresh Prince of Bel-Airâ€ blared over the speakers, with fans singing along, as Sugar Ray walked offstage.

All great nights must come to a close, but not before one last performance from the founders of the massive “Summerland Tour.” McGrath was once again back out to introduce Alexakis and and the headlining Everclear to the stage to a now very packed house. Alexakis wasted no time chatting or jamming, busting right into the classic, “Father of Mine.” The singerâ€™s use of putting a joyful vocals paired with upbeat riffs for songs dealing with sad and complicated topics have never ceased to amaze us, as was on display Wednesday night. The band then launched into â€œEverything to Everyoneâ€ and “Heroin Girl,” from 1995â€™s “Sparkle and Fade.” But after just a couple of bars into the song, Alexakis stopped playing as fans in the crowd were starting to mosh. The singer felt it only right to act protectively, alerting the male moshers that it was no longer the 90â€™s and that such antics would prove injurious to some of the female fans in the crowd. The situation was quickly chilled out,and the band resumed the song. Everclear rewarded the capacity crowd with a cavalcade of memorable favorites from “AM Radio” and “I Will Buy You a New Life” to the recognizable â€œWonderful.â€

Just when we thought the boys of Everclear were ready to wind down the evening, Alexakis pulled a few tricks from his black sleeves bringing out Gin Blossoms singer Robin Wilson to help out on “Be Careful What You Ask For,” a new track off the bandâ€™s latest album, “Invisible Stars.” The tune captured the classic sound of the group, but defines where they are headed as well. Following a quick tease of Led Zeppelinâ€™s â€œRock and Roll,â€ the band invited the support acts and their families on stage for a group rendition of Everclear’s chart topping song, “Santa Monica.” From McGrath to the Popoff boys and their kids, everyone got a chance on the microphone bring this night of celebrating and honoring 90â€™s rock to an epically satisfying close.

Just before show time, LocalBozo.com sat down with Everclearâ€™s Art Alexakis backstage for an exclusive video interview, coming next week. Make sure to check back on LocalBozo.com as we discuss how the tour came to fruition, the release of their latest album â€œInvisible Stars,â€ stories of playing in New York City, and so much more!