EVE 6 with Fall From Grace: A LocalBozo.com Concert Review 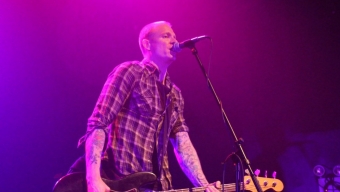 Eve 6 with Fall From Grace and The Audition
The Gramercy Theatre, New York, NY
May 7th, 2012

With the release of 2012′s “Speak In Code,” Monday night marked the return of anthemic pop rock trio EVE 6 to the New York area. Following a couple of shows at the Mercury Lounge in 2010, the band would return, this time to a completely packed Gramercy Theatre with likeminded bands Fall From Grace and The Audition. For New Yorkers, this cheery brand of upbeat, catchy rock music would be a relative departure from much of the death and metal outfits that typically parade through our Metropolis. And the EVE 6 faithful was out in full support on this night for a trip down memory lane.

Concert Review: Fall From Grace at the Gramercy Theatre

Openers Fall From Grace certainly seem to have the formula down pat. With catchy, bouncy choruses and familiar sounding riffs, the band almost seems displaced from a decade prior, which today is unfortunate since they’re every bit as good musically as bands of the same ilk in terms of both songwriting and playing. In fact, I shudder to think that this Seattle band could have been as big as the Good Charlottes of the world had it been 2002 instead of 2012. Mixing in high energy punk with pop, lead singer Tryg Littlefield repeatedly proclaimed his genuine excitement to be in Manhattan, their first night on the tour. His attempts to rally a mostly subdued crowd weren’t for a lack of trying. The audience was mostly appreciative of the band’s set- the opener “King of Lies” and the closer “Hated Youth,” were both particularly rousing. Mixing Littlefield’s high pitched vocals with harmonies from bass player (known simply as) Cotton, the smiling, happy-to-be-here band was almost too excited for their own good, parading through their eight song set. Eventually, the crowd came around by the close of their performance, which served as an ideal opener for EVE 6, who similarly, look and sound like time has stood still.

Following an uninspired performance by The Audition, most notable because frontman Danny Stevens managed to miss a step and completely split open the inner front thigh on his jeans, it was time for SoCal’s EVE 6 to take center stage. With his familiar shaved head, tall and slim, vocalist/bass player Max Collins (former LocalBozo.com interviewee) led his three piece band out to the New York City crowd to a thunderous applause. Outfitted in some skinny jeans and a plaid short sleeve t-shirt, Collins and company paced the set with the band’s iconic pop singles perfectly interspersed between cuts from the new album. The infectious “Situation Infatuation” as the opener proved a perfect segue way into 2000’s “Promise,” while singles “Think Twice” and “Leech” amped up the crowd appropriately for the poignant “Here’s to the Night.”

Despite having played the same songs relentlessly over much of the past decade, the band didn’t look disinterested even for a moment, although new tracks like “Lost & Found” and “Victoria” did appear to enthuse them. What the band may lack in stage presence, they make up for with their signature brand of elementary, yet likable riffs and a certain familiarity associated with the fond memories of their songs. Often it appears that Collins, while moving about the stage, won’t make it back for the start of his verse, but he manages to do so just in time to join the crowd singing along.

Midway through the band’s set, the entire venue appears almost at capacity- the standing room only crowd is literally chest to back covering the floor’s space. The lead singer is most comfortable onstage when performing, but addressing the crowd he seems uneasy. Once he begins talking, it’s almost like he can’t stop and his sentences form and run together almost rhythmically until the next song begins. Collins then asks the crowd to “make the ultimate sacrifice for your rock n roll,” as the audience claps a sea of hands overhead to drummer Tony Fagenson’s pounding kick-beat. In a live setting, Collins is imperfect. Sometimes offkey melodically, he’s unable to match his brilliant vocals in studio. But for whatever reason, it’s okay. It works. Couple that with the veritable look of a California rock star and you have Eve 6- a pop rock band, with some of the most successful and catchy songs released that completely capture the decade of the 2000’s, proved essentially by their main set closers “Inside Out” and “Open Road Song,” to which the swarm of EVE 6 fans sang every word.

EVE 6 – Live at the Gramercy Theatre