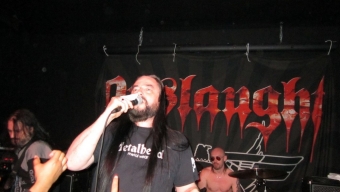 No matter what type of music you listen to, you name me a band and I’ll show you just how life on the road has changed them. Years of touring and differing personalities have broken up and sometimes rearranged some of the greatest outfits in music. Founded in 1982 as one of the forefathers of the British thrash movement, Onslaught is one such band, having seen members come and go for just about thirty years. Now with a stellar lineup of past and present players these metal Gods are traversing the states showing the good old USA how to really bang your head. On Saturday night, Brooklyn became the latest stop on Onslaught’s domestic run.

It must be said that Saint Vitus is a tremendous bar and concert venue for metal fans. The front bar serves up reasonably priced booze and killer bun sandwiches while random headbanging hits blare over the speakers. In the back area lives a venue that has been perfectly soundproofed to capture every shredding lick put out by whatever band is on stage. And on this spring night, it would be Onslaught’s turn to use this space to their advantage.

Luckily for us, the latest and perhaps the finest incarnation of Onslaught stormed Greenpoint’s house of heavy metal playing before a sold out crowd. This tour would mark the band’s first outing in the states in support of their new album, ‘Sound of Violence.’ The bill was loaded with killer support acts with Indestructible Noise Command and Mpire of Evil, featuring members of the legendary band Venom, filling out the undercard, forming a seriously well-rounded rock bill.

Longtime lead singer Sy Keeler made his presence felt as soon as he hit the Saint Vitus stage. The hulking front man has a singing range few possess, switching from a high pitched scream to a low growl at the drop of a dime. And with the help of members representing various years of the band’s existence it was hard not to marvel at how tight these musicians play. Andy Rosser-Davies and Nige Rockett shredded through the band’s deep catalog melting the faces of fans new and old. Peering through the crowd I could spot even the scariest of metal heads with huge smiles on their faces. A hard accomplishment indeed. But when you’re a band with such a rich history, it simply comes naturally.

The band gave a ton of love to their latest album by ripping through the tracks to the pleasure of the crowd. Unlike some of Onslaught’s brethren, their new music still retains the hard edge that put them on the map in the first place. Huge moshpits formed as they played new songs like, ‘Born for War.’ Even if you weren’t in the pit, fans could be seen banging their heads with horns held proudly in the air. It was truly a metal show, for die hard metal fans.