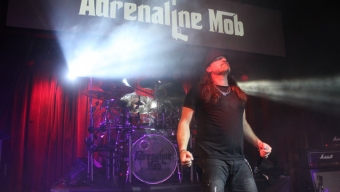 As fans of any genre of music, you pledge a certain type of loyalty to the bands that you love while keeping tabs on the individual musicians when they move on to other projects. Often these extraneous outfits are labeled “side projects” and when they comprise members of different accomplished bands, they are dubbed a “supergroup.” But labels such as these truly minimize the potential impact a newly formed band can make because the memory of their previous work can be so prevailing. This mentality needs to medicated. And it’s vaccination comes in the form of legendary musicians- Russell Allen (Symphony X), Mike Orlando, Mike Portnoy (Dream Theater), and John Moyer (Disturbed). Together, these fantastic performers have formed Adrenaline Mob and Monday night at New York’s Hiro Ballroom, a packed crowd learned first hand at the, “Mob’s” record release party for “Omertá” (Available Now!) that the worlds of hard rock and heavy metal have a whole new animal on their hands.

Fans filled the Hiro Ballroom hours before the band would even take the stage, as the members showed up early for a VIP meet and greet and autograph session. The evening was treated like a celebration. Many attendees were anxiously drinking beers while jamming to piped in Pantera, waiting for the band to take the stage. During this calm before the storm, all eyes remained focused on the stage featuring Portnoy’s massive drumkit, covered with a cloth just itching to be revealed. Shortly after 8:30, Jose Mangin from SiriusXM radio came out to pump up the crowd and introduce the band. His energy was the perfect kick-starter for a night filled with rock in it’s purist form.

Moments later, the Hiro Ballroom went dark and the band took the stage to a thunderous applause. All four men briefly pounded fists and then quickly ripped into “Undaunted,” the first track off of Omertá. It would be a night where each cut from the new album would be played in celebration of the release. The energy poured from the guys right from Orlando’s first lick. Adrenaline Mob lead singer and De-facto Godfather, Russell Allen belted out this tune with the accuracy of the studio recording, but with that extra push off the cliff that can only be received from a live concert experience. His vocals live incredibly ranged from metal howls to melodic harmonies, and from such an imposing figure, the whole thing worked exceptionally.

It can’t be said enough how cohesively the band works onstage. All four of their distinct and very different backgrounds, have only elevated what was on stage last night. The album’s first single, “Indifferent” is rooted in everything rock fans appreciate- catchy lyrics, sick riffs, and fun, never bloated solos. The live version managed to meet this intensity and then some. The show and the album similarly featured a terrific contrast of fast metal-friendly songs like, “Pyschosane” and “Freight Train” and a solid group of slower southern-style jams like, “Angel Sky.” Omertá also features a fun cover of the 90s era Duran Duran song, “Come Undone.” The studio track featured Halestorm front-woman Lizzy Hale who does a killer job singing the chorus, but since she was overseas, Allen was tasked with performing it on his own, which he did vigorously with seemingly great ease.

After performing every track from the new album, Adrenaline Mob still had some fight left in them and after taking a brief break from the stage, they came back launching into a Black Sabbath encore featuring songs from both the Dio and Ozzy era respectively. They began with a flawless cover of “The Mob Rules,” a band favorite, featured on their 2011 EP. And for fans of the original Sabbath, the, “Mob” busted out, “War Pigs” which involved a heavy crowd sing-along. It was during this cover that the talents of this band really stood out immensely. Drum God Mike Portnoy was simply a sight to be seen live and not just heard. The man is a legendary musician for a reason and he treats his intricate drumkit like a mad science experiment. With arms and legs moving in so many different directions, his body works so quickly that the only proof that there is of him touching each pad and symbol is the pounding sound you hear. Newcomer John Moyer, made his official debut with the band at the Hiro show, but his persona seamlessly fits into the outfit with his long dreadlocks bouncing to his every bassline. Guitarist Mike Orlando became the night’s revelation, with his fingers moving with lightning precision up and down each fret, breaking off solo after pulverizing solo, smiling at a crowd who looked back at him in utter wonderment. Orlando is a true shredder, and breathes even more life into an already energetic band.

It may have been an album release celebration for Adrenaline Mob, but in reality the evening served as a catalyst for a coming out party. The band is comprised of four immeasurably talented musicians, forced to harness their efforts to work together collaboratively. Just watching them perform, you almost get the feeling that working together might actually be holding them back as individuals because of the fact that any of them would be the stand out performer in any other band. But as a collective group, they are an extraordinary act who will staggeringly, only get better as they continue to perform together. LocalBozo.com’s Adrenaline Mob coverage doesn’t end here. Stay tuned to this site for a video interview with drummer Mike Portnoy and bassist John Moyer coming soon. Adrenaline Mob’s debut album, Omertá is available wherever you buy your hard rock music now. If you appreciate real rock music, you need to buy it now and tell all your like-minded friends about it. It’s time for all fans of rock to join the Mob.