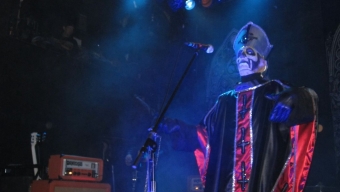 The rock music genreÂ is an always changing animal, one which must grow and adapt to remain relevant. One of the most prominent keepers of the rock faith is the mysterious Swedish band known simply as Ghost. The group, led by someone who can only be referred to as a ‘demonic cardinal,’ initially formed in 2008 and since their inception, Ghost has taken the metal world by storm. Wednesday night, a sold out Bowery Ballroom played host to the “Nameless Ghouls” of Ghost who kicked off their “13 Dates Of Doom Tour.”

Even before the house was opened, the line snaked down the Bowery with eager metal fans clamoring to get a view of Ghost. Many on line were lucky enough to catch the band during a one-off date last year, while many like myself were seeing them for the first time on this night. Once doors opened, metalers were treated to two tremendous hard rocking opening acts. First up was Austin, Texas’ Ancient VVisdom. This four piece got the night kicked off on the right foot, with their alternative form of doom meets sludge metal. The lead singer Nathan Opposition, who also plays percussion, commanded the crowd admirably. The band’s skills were on display especially on “Devil Brain,” pounding on the drums like a judge’s gavel, pointing sticks at the crowd handing down a verdict. Very cool stuff indeed.

No time was left to catch one’s breath when Toronto’s Blood Ceremony erupted on stage. And that’s a good thing! The Canadian four piece is led by frontwoman Alia O’Brien, who aside from being a haunting vocalist, also plays the flute and organ seamlessly during the live performance. The band ripped through their thirty minute set, tantalizing the packed house with a turned up to eleven version of folk and seventies new wave metal. When they announced just one remaining song to play, the crowd pleaded for more. Blood Ceremony obliged and left us with “Oliver Haddo,” a perfect send off from a band that we will definitely re-visit the next time they come to New York City.

The witching hour had approached and as such, the stage the suddenly went dark. There was a blue hue bouncing off three banners which resembled that of a Church’s stained glass. Smoke appeared to roll in from out of nowhere as three ghouls all cloaked in black slowly made their way to the stage, grabbing their instruments. The crowd crushed to the front and it was now time for Ghost to finally serenade us with their dark sermon. The band- minus their demonic lead singer- ripped into “Genesis,” showing off their serious music chops. Not soon after the song had finished, the ‘satanic cardinal’ took to a raucous ovation from the tightly packed, hungry metal fans.

Whoever this guy really is doesn’t matter. His unmistakable and remarkable stage presence on display through this persona was enough to satisfy the entire room. From the word go, the mysterious band of Swedes tore through what appeared to be every track from debut album, “Opus Eponymous.” Each live version of these songs elevated the amazing studio album to new heights. Little time was left for banter with the crowd, but whenever he thanked us, people went crazy.

The band was extremely tight with both vocals and instrumentation. The live renditions of “Elizabeth,” “Death Knell,” “Ritual,” and a dark cover of The Beatles’ classic “Here Comes The Sun” both mesmorized the audience before melting their collective faces. Horns were raised high as the crowd song along knowing each and every word throughout the band’s set. This lyrical devotion was overly apparent when they played “Satan Prayer” which was the best song performance of the evening. During the chorus, ‘the cardinal’ gave the metal hungry crowd several chances to sing the hook, often staring directly at us with his piercing eyes, using his hands to lead us like some type of satanic conductor.

Not a single moment was wasted during their set, as the band’s haunting stage presence filled the space between songs. If you are a fan of hard rock, and metal I cannot recommend these guys enough. Try to see these guys at an intimate venue like the Bowery Ballroom while you can, because they are on the verge of blowing up here in the states like they have in Europe. In a world with such cookie cutter music, we need a dangerous band like Ghost to entertain while also creeping us out at the same time. The true rock spectacle is alive and well, and its name is Ghost. Sweet dreams fiends.