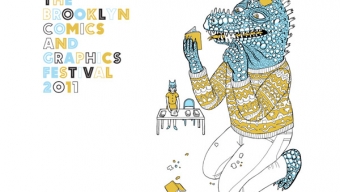 Saturday, December 3rd, 12:00pm – Hop on the L Train to Williamsburg for the The Brooklyn Comics and Graphics Festival. The fest is a one-day festival of cartoon and graphic art featuring artists and publishers displaying and selling publications; lectures and conversations on comics; and associated exhibits and satellite events. ( The Brooklyn Comics and Graphics Festival )

Sunday, December 4th, 4:15pm – The 6-5 G-Men head home to Metlife Stadium to take on the undefeated Green Bay Packers. Can Eli and the Giants pull out a win or will the Cheesheads put them on ice. ( New York Giants )

Friday, December 2nd – Movie release day. Quiet night tonight? Check out these releases coming out today. “Shame” (NC-17),Michael Fassbender stars as a man living in New York who is unable to manage his sex life, causing him to delve into a world of sexual addiction. Carey Mulligan also stars. And in keeping with films on the edge you might also want to check out our next cinema pick. “Suck Punch” star Emily Browning plays Lucy, a young university student drawn into a mysterious hidden world of unspoken desires in, “Sleeping Beauty.” This film is Not Rated.

Friday, December 2nd, 7:00pm – Pop singer-songwriter David Archuleta, will show a near sold out Irving Plaza crowd why he was such a American Idol favorite. Maybe you will see the same thing that tough Idol judge Simon Cowell saw, when Archuleta sings covers of,  “Don’t Let the Sun Go Down on Me”, “In This Moment” and “Imagine.” ( Irving Plaza )

Friday, December 2nd,10:00 pm – It’s the one year anniversary of Skyroom Fridays – New York’s best rooftop party with Resident DJ Amadeus Alongside Guest from KTU Radio DJ Chris Bachman. Join in on the celebration on their heated Outdoor And Indoor Rooftop Soiree in the Skies of NYC to start your weekend in style! For the night they will also be featuring world renown Drummer Curtis Watts and  exotic Dancers including Asia from The Pussycat Dolls. ( Sky Room NYC )

Saturday, December 3rd,12:00 pm – The Daily Muse is partnering with Saatchi & Saatchi to host the first annual SheMakes Holiday Festival. The Daily Muse’s goal is to celebrate and encourage women who create. From designers to food entrepreneurs and everything in between, they want to help holiday shoppers discover emerging talent and find unique gifts from female-led companies. ( The Daily Muse )