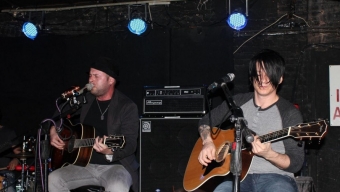 Sometimes, stripping a heavier band down to nothing but acoustic instruments exposes the fact that their music is only conducive to screaming vocals and pounding electric riffs. But sometimes, and the following rings true for Virginia band Hurt, the unplugged style performances really play to a band’s strengths. Such was the case at last night’s performance in the intimate space at Manhattan’s Mercury Lounge, which found the band in a dangerously close proximity to the fans that came out, in a setting that was in a word, different.

Foregoing the Fenders and crashing Zildjian drum symbols, the stage was equipped with cellos and violins. Stools and acoustic basses replaced the volume and distortion typically synonymous with a rock show. Conversations amongst the concertgoers could even be heard audibly, sometimes to the detriment of the band on stage. Never wavering once stepping into the spotlight however was Hurt, who delivered a solid (and surprisingly extended) 75 minute set at the venue’s early show. The stripped down performance served as a showcase for the vocals of frontman J. Loren, who alternated between hitting the high notes as he seemingly so chose and allowing the audience to unleash voices of their own during the band’s familiar singles.

Though several lineup changes have forced a different makeup for Hurt, the band never looked anything but comfortable and in-sync throughout their only New York City appearance. Drummer Victor Ribas smiled at the crowd singing along almost throughout the entire set, alternating between nodding at bassist Rek Mohr and closing his eyes, concentrating on setting each song’s pace. Guitarist Michael Roberts, seated next to Loren, impressively pulled off several acoustic solos while the talented Loren alternated between playing two different violins and singing into a distortion mic and a regular one seamlessly.

At first glance, Loren would appear to be a poor man’s Aaron Lewis, both in look and sound. Though not as riveting melodically, his slowly ramped up vocals when escalating to a song’s chorus evoke the same ‘pound your fist and scream the words until a vein in your head pops’ feeling as does the Staind frontman. And because of Hurt’s relative lack of commercial success, at least to this point, the intimacy of a small show like this gives fans a unique opportunity to appreciate the young singer’s talents.

Early 2012 (tentatively March 27th) will mark the release of Hurt’s sixth album “The Crux,” but last night’s show was a nod to the previous five. Openers “Shallow” and “Assurance” proved melodically haunting while the band’s catchier singles “Ten Ton Brick,” “Wars,” and a heartfelt version of “Rapture,” kept the crowd on their toes, with slightly different musical arrangements from their studio recorded originals. “Falls Apart” was an outstanding choice as the closer of the set as the entire crowd seemed to come alive and sing along in unison. Though the show may have lacked the spirited intensity that Hurt’s albums seem to embody, their songs are ones that are adaptable enough to lend themselves to be performed in this exact sort of cozy, almost serene environment- even though the fervent rock music fan inside each of us was itching to show its face.