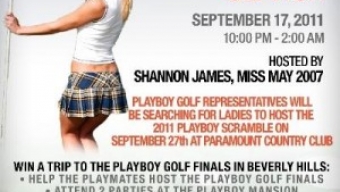 Friday, September 16th- Another September, another San Gennaro Festival! The free celebration brings over a million people down to Little Italy with hordes seeking out zeppoles, fried oreos, wanna-be authentic Italian fare, and more sausages than you’ve ever seen. But the street is a sea of energetic people ripe with carnival style games and shopping with sights, sounds, and smells that come around only once a year. Just be thankful you don’t live on Mulberry Street. (San Gennaro Fest)

Sunday, September 18th- Weird sports weekend with the Mets and Yankees both on road trips. Don’t worry- right across the pond, the New York Jets play host to the Jacksonville Jaguars on Sunday with a 1pm start. Maurice Jones-Drew and (gulp) Luke McCown come to town to battle Gang Green. (Jets Tickets)

Sunday, September 18th- Not a football fan? The HighLine Ballroom has $25 seats to see the superstars of Chikara Pro Wrestling. In a rare show on the HighLine, catch some of the best independent workers in the world hone their craft in Manhattan. With a 4:30 bell time and no new HBO shows at night- why not go? (Chikara Pro Wrestling)

Sunday, September 11th- Head across the pond to the newly dubbed MetLife Stadium and join LocalBozo.com as we cheer on Gang Green in the New York Jets home opener against the hated Dallas Cowboys. Sanchez. Revis. Rex. Football is back and the Jets head back to the playoffs for the 3rd straight year. (Chikara Pro at the HighLine)

Friday, September 16th- Movie release day. Quiet night tonight? Check out these releases coming out today-“Drive” (R) with Ryan Gosling, Carey Mulligan, Bryan Cranston, and Albert Brooks. A getaway driver has a bounty on his head after a botched robbery. Intense violence. Great action. Read our full review. Also, Sarah Jessica Parker’s “I Don’t Know How She Does It” (PG-13) features a woman with a ton of things on her plate and figuring out her work life balance. Sounds like my life. Don’t blame us if you hate this one, but Drive is really good.

Friday, September 16th- Sunday, September 18th- Weekend music explodes with the Dave Matthews Band Caravan Festival rescheduled for this weekend at Randall’s Island. The headliners will play a new set every night with support from a ton of bands like O.A.R., Dispatch, Warren Haynes, and Josh Ritter. (DMB Caravan) Or, head over the river Sunday night and catch The Who’s Roger Daltrey performing Tommy at The Prudential Center in Newark. (Roger Daltrey Tickets)

Friday, September 16th- Phuket NYC hosts I Love Viernes: The Virgo Affair with DJ’s Sansone, Venom, Abrupt, Velz, and an oipen bar til Midnight! Tomorrow, the New York Girls of Playboy Golf Search rolls into The 2FL in Brooklyn. Miss May 2007 Shannon James will be searching for hot girls to host the Playboy Scramble on September 27th at the Paramount Country Club. Dancing Included. Blowouts Optional.

Saturday, September 17th – Loreley Williamsburg kicks off Oktoberfest with the tapping of a keg of Oktoberfest beer at 3pm with Brooklyn Borough President Marty Markowitz. Attendees will receive a free beer from the keg (until it runs out) and enjoy suckling pig and sausages. (Oktoberfest)