Sully Erna at The Grand Ballroom: A LocalBozo.com Concert Review 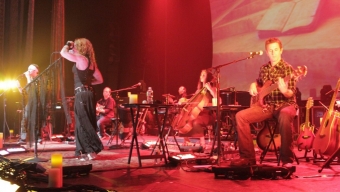 Thursday night, The Grand Ballroom which sits just above the famed Hammerstein Ballroom, played host to Godsmack frontman Sully Erna in a rare and intimate performance entitled “Sully Erna Presents Avalon.” Pick splitting electric guitar riffs and head pounding drum beats were replaced by cellos, ukuleles, and bongos, as rows of chairs were laid out on the floor of the elaborate and spacious ballroom. Erna credits that the album was “influenced by the journey of Pink Floyd’s dark side of the moon” and that he intended to “have you feel what music is really about.” Clearly, this was not your typical hard rock concert.

Erna’s solo album “Avalon,” was released in September 2010 and marked a very clear departure from the sounds that Godsmack fans had come to know. In his only area solo performance since its release, the live show was just that- a departure. But that didn’t prevent the usual cast of characters from coming out to support the tattooed frontman. Metalheads donning black shirts, their hair either long and draped in ponytails or shaven exposing their tattoo laden necks, still came out in unison. While the venue was relatively undersold, the crowd genuinely seemed to appreciate Erna’s earnest attempt to bring something different to the musical landscape, something he truly felt has been left behind as the industry has progressed.

After a lengthy introductory video piece about the science of sound and how music helps us to experience different feelings, there was Erna, confidently outfitted in a thick white bandana-headband, and black button down shirt. Backed by an incredibly talented collection of musicians, including female vocalist Lisa Guyer, whose performance was so brilliant that her name bears mentioning, Erna weaved through each of the cuts from the entire “Avalon” album, as a massive video screen flashed trance-like and trippy images throughout.

The songs were slower than we’re used to but his deep, familiar voice sounded the same. His haunting howls (which are terribly underrated especially during live performances) hit every note on point, as his backing band turned from a six to an eight piece outfit. The sounds forged a middle ground between mellow and intense with a heavy mixture of goth and tribal influences. Some of the more poignant moments included “My Light,” a heartfelt duet with Guyer as video flashed behind the stage of Erna playing with his daughter from a baby through adolescence, and “Eyes of a Child,” a socially conscious song with the backing video flashing images of children infected by HIV and AIDS, closing with a graphic reading “Together we can change the world.” But in between it all it’s clear that this is a concept album for Erna, jumping from piano to guitar, anxious to show that he’s come full circle as a musician, wanting to branch out musically beyond the screaming frontman who’s toured with everyone from Metallica to Motley Crue.

As Erna serenaded the crowd for the first 75 minutes, he didn’t interact with them, letting the tribal sounds do most of the talking for him. Only when returning to the stage alone for his encore, which received a rousing standing ovation, did Erna finally address his audience. Humble and genuine, said Erna “It’s nice to see people like yourselves to come out and experience music. It’s the soundtrack of our lives and it affects us in so many different ways.” Dispelling any rumors that his solo career was his primary focus Erna declared, “Godsmack is alive and well and this is a different part of me that I want to explore.” He then pulled out his acoustic guitar and ripped out a solo version of Godsmack’s “Serenity,” before introducing the entire band onstage and closing with a “The Chain”-”Hey Jude” medley that sent any Godsmack disciples questioning his brief hiatus, home appreciatively.