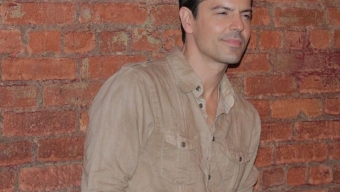 On the same day he would release his first new solo album in five years “Unfinished,” heartthrob Jordan Knight packed as many gushing females as capacity would allow into The Canal Room Tuesday night, in a celebration of his newest album release. With a night off in the midst of a current New Kids on the Block / Backstreet Boys tour (or NKOTBSB) slated to hit every major arena in North America, Knight brought in a few hundred of his biggest fans for a small promotional party in Tribeca. And although the music was different, the sound remained the same.

The evening was emceed by KTU jock Paul Cubby Bryant, with Boston DJ Clinton Sparks spinning for the feverish crowd. Before the night even began however, out was Knight himself, making rounds and hugging his way through the 99 percent female crowd. Looking exactly as he did in 1990, Knight was completely and genuinely humble and in good spirits, walking around the standing room floor and elevated VIP portions of the Canal Room, even pausing for photo opportunities with fans and press.

Bryant was out onstage next to introduce opening act Kat DeLuna. Donning the stage with three shirtless male dancers, DeLuna emerged in a black, fishnet top, her long blonde hair whipping around with each movement. DeLuna played a short three song, dance inspired set, even bringing up several girls from the audience on stage with her to dance to her latest single, “Drop It Low” which as she continuously reminded us, was available on iTunes. Singing over her vocal track, DeLuna appeared comfortable onstage and capable vocally, even though the audience was anxiously waiting for Knight to perform.

With “the Jordan Knight fans are the coolest people I’ve ever met,” Bryant introduced Knight to the stage. What can only be described as a massive applause roused by howling females holding literally hundreds of digital cameras broke out preceded Knight’s arrival to the stage. Wearing a black leather jacket, silver studded belt, cream colored v neck, and black pants, Knight looked not a day older than he did when he re-emerged musically in 1999. Backed by a live band of more Boston natives, a group called “Elevation Theory,” Knight crooned through four tracks from his latest release- opening with the feel good “Let’s Go Higher,” into a song called “One More Night,” an upbeat, pop track led off by Knight asking the crowd “New York, can I spend this night with you?” You can imagine how the crowd responded.

The highlights of the evening were Knight’s throwbacks to the 1990’s with “Give It To You,” which the cavalcade of women ate up, before the familiar keystrokes of an energetic version of New Kids on the Block’s “The Right Stuff” brought the house down with the live crowd handling the backing vocals. Knight confidently paraded around the stage, often times interacting with the fans nearby, asking for song requests, before spontaneously switching up the setlist as the evening wore on; the crowd almost swooning with his every sensual movement.

His final question “Do you like my tight pants by the way?” made the crowd erupt before closing his nearly 50 minute set with “Stingy,” again a new track. He walked through the crowd as the show closed, singing to fans as mobs of aggressive, yet somehow polite girls rushed him. The evening felt like a snapshot in time- fans of the New Kids on the Block as kids, were all grown up and there, gazing at him like he was still the same teen sensation that enraptured them 20 years earlier. The songs from his new album “Unfinished” sound like a quintessential boy band album frozen in time, but still familiar and fun. Maybe his music hasn’t matured necessarily all that much in the last 20 years, but that’s okay. Try and explain that to the fans that packed the Canal Room on this night or to the thousands that will be filling in arenas across the country (including a two night stop at the Izod Center) all summer long.