A LocalBozo.com Concert Review: Seether at The Gramercy Theatre 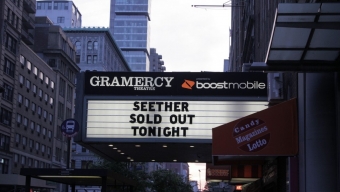 Seether
with The Red Jumpsuit Apparatus
The Gramercy Theatre, New York, NY
May 24, 2011

Fresh off of the release of their fifth full length album, “Holding Onto Strings Better Left to Fray” (May 17th), Seether took the stage at The Gramercy Theatre on Tuesday night in front of a sold out New York City crowd, packed to the gills for an evening of rock music. The 75 minute set was a mixture of songs new and old, delivered with the same melancholy metal that fans have come to expect from Seether- slowly penetrating verses leading into scathing and incredibly catchy choruses- led by a frontman who is able to harness all of his sublime talents at once. Now a three-piece outfit following the departure of lead guitarist Troy McLawhorn in March, the band was forced to make do, with its remaining pieces. And they pulled it off brilliantly.

The lights dimmed inside the majestic Theatre just after 9:15pm, as swarms of hungry grunge and rock fans inched closer to the railing in front of the diminutive stage. Frontman Shaun Morgan was out first to a raucous ovation, entering casually in complete darkness- no backing track, no lights, no frills. Dressed in a plaid button down over an Under Armour shirt, his sleeves rolled up exposing his tattoo sleeves on both arms, with black painted fingernails and long hair in his face, his neck and shoulders soaking wet, Morgan barely acknowledged the crowd before igniting them with opener “Gasoline.”

Between songs, Morgan, bass player Dale Stewart, and drummer John Humphrey were even less conversational with their audience which was a revelation that actually became refreshing. Forgoing the traditional crowd interaction and the repetitive banter that bands so often bring with them from town to town, Seether instead let their talent do the talking, and the crowd responded stronger to that than perhaps anything else they could have verbalized. Time will only tell if Seether will wind up finding a new lead guitarist, but in the mean time it seemed everyone else was able to pick up the slack. Stewart split time between playing bass and an acoustic six string during “Broken,” with the crowd picking up the vocals left absent by Evanescence’s Amy Lee. Morgan was forced to shift back and forth between guitar solos and rhythmic work, while supporting his outstanding live vocals. And again, Stewart coming through with the acoustic work on the band’s latest single, the indelibly likable “Country Song,” for which the capacity crowd on hand exploded.

With each Seether performance, you tend to want to make parallels between them and other comparable bands, and for much of the night, we found ourselves reminiscing about Nirvana. As we struggled to seek out more suitable comparison, almost on queue the band launched into a full cover of Nirvana’s own “Heart Shaped Box” from 1993’s In Utero. Closing our eyes momentarily, the similar sounds and chords were unmistakable, and the performance of the song was the closest we’d ever get to hearing Kurt Cobain again. The rest of the set was rounded out with a fantastic drum solo with Humphrey playing the skins like bongos, sans sticks before resuming with a short, killer solo, before the band would close with five singles and ultimate crowd pleasers. The aforementioned “Country Song” may have been the highlight of the night, considering the crowd reaction it received, followed by the plodding “Breakdown,” the uplifting “Rise Above This,” the ‘dance a little jig’ “Fake It,” and the pulverizing “Remedy,” which started the largest, most violent moshpit of the night by far.

Since 2002, Seether has consistently found a steady place atop the modern rock charts, touring both as a headliner and support act. Through shuffling band lineups, breakups, and bouts with sobriety, the group has managed to remain as cohesive and steady as ever; Morgan’s voice has never sounded better. As the show reached its conclusion and Morgan graciously waived goodnight to the packed house, the rebellious frontman would throw his guitar directly into the drum kit and walk offstage smiling, in the ultimate act of defiance. And the crowd, giving the band a standing ovation, was happy to reciprocate, fervently supporting a band that sets trends refusing to follow them.