A LocalBozo.com Concert Review: My Chemical Romance at Terminal 5 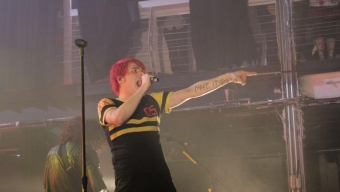 Just across the river from their Jersey City, New Jersey hometown, rockers My Chemical Romance took the stage at Terminal 5 Friday night for the first of two sold out shows at the west side hall. With support from Architects and Neon Trees, the aptly titled “World Contamination Tour” skewed to a younger audience, but to an audience of frenzied fans waiting to let loose at the first sign of frontman Gerard Way and company. And at 9:30 on the dot, as the house lights went black, and the first hint of chords of “Na Na Na” began, the late teenage shrills resonated throughout the small venue, likely out into the streets as a truly fun performance began.

Since forming in 2001, My Chemical Romance rose to stardom relatively quickly- from creating a strong, solid fanbase with free Myspace downloads, to touring with acts like Avenged Sevenfold, Fall Out Boy, Green Day, Bon Jovi, Linkin Park- before emerging on their own as headliners with support from bands like Muse, Rise Against, and Thursday. If the release of 2006’s “The Black Parade” was their breakthrough album, 2010’s “Danger Days: The True Lives of the Fabulous Killjoys” might just be their best. In fact eight of the 17 songs from the Friday night set were cuts from the band’s latest release- and the swarms of rock fans in the house ate up every last sound of it.

The band’s entire performance was essentially a sped up ode to youthful dissidence, celebrated by a collection of defiant teens collaborating upon a singular focus, cheering alongside each other, screaming for just a glimpse of the band’s attention. Vocalist Way’s high-pitched vocals and highly energetic stage presence only served to lift the crowd further off their feet as dueling guitarists Frank Iero and Ray Toro blasted the supporting tacks for Way to harmonize over. The aforementioned setlist was a solid meshing of new tracks with My Chemical Romance staples, and songs rightfully considered iconic with the adolescence of those of that age.

The ultimate highlights for us were a four song stretch toward the end of the set including the crowd pulverizing “Famous Last Words,” into the new album’s “Destroya,” to a heartfelt rendition of “Welcome to the Black Parade,” and finally into a completely fun and vigorous version of “Teenagers,” to which nearly the entire crowd was singing along in unison. 2004’s “Helena” capably closed the set out, before fans almost lost it trying to get the band to return for an encore. My Chemical Romance gladly obliged with the closer “Bulletproof Heart,” a catchy, riff-rocking song, which is sort of a nod to The Killers’ “Mr. Brightside,” while mixing in fun, traditional late 90’s punk pop, and a chorus that defies you not to sing along.

The last time My Chemical Romance tore through New York City, they played to a sold out Madison Square Garden, so the band is clearly capable of headlining arenas. But recognizing that sometimes it is more rewarding to have a uniquely intimate experience with smaller groups of their fans is something that the band hasn’t lost sight of. Although the leg in New York has passed by, there is still time to catch My Chemical Romance and company on the World Contamination Tour (including two nights in New Jersey), and we urge you to do so before they go back to headlining arenas or even (gulp!) stadiums.