Should You See The Adjustment Bureau? A LocalBozo.com Sneak Preview 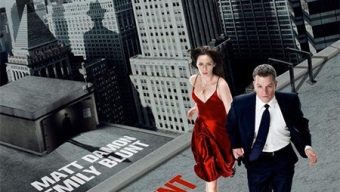 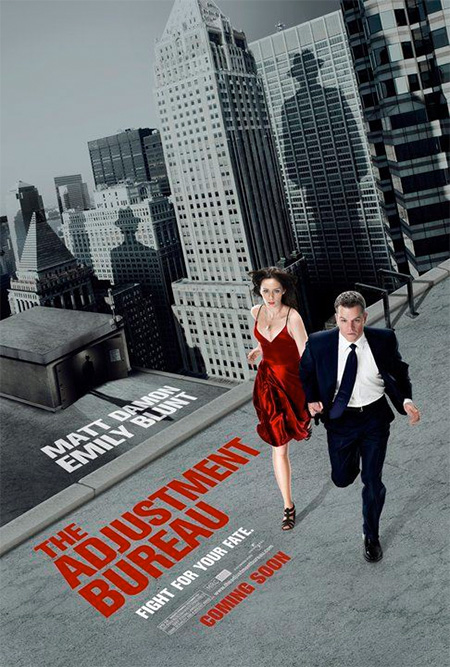 This review contains no spoilers

Unless you’ve been living in a cave until recently, you’ve undoubtedly seen billboards or commercials for The Adjustment Bureau, which opens this Friday, March 4th, and stars Matt Damon and Emily Blunt (The Devil Wears Prada).  The story follows the journey of young, rising politician David Norris (Damon) as he is in the midst of a New York Senate race.  Although he is constantly reminded of his troubled past, his constituents seem to appreciate and relate to his everyman, down-to-earth demeanor, which makes him a refreshing political contender.  But just as he begins a push toward victory, he is again derailed by a past transgression and while his first bid for a Senate seat comes up short, he meets Elise Sellas (Blunt), a professional dancer, who in just a few minutes makes him forget his candidacy, and shift his focus toward pursuing her.

From that point on, the movie switches back and forth between sappy love story and a completely implausible mind control subplot, as a group named The Adjustment Bureau is determined to keep both of their lives on track by ultimately keeping them apart.  The film then delves into the age old question- what is fate and what is free will while attempting to explore how much of what we can control has actually already been predetermined for us.  Does destiny exist or are we being manipulated?  The Bureau, donning suits and fedoras, act like regular working businessmen (even though they are archetypal Angels) doing their job, and take orders from a metaphoric God, as if fate is actually monitored by a working organization.  Sometimes in every human’s life, there are blips that occur that disrupt a preordained plan, where the Adjustment Bureau must get involved and set the plan back on course.

There are several plotlines that diminish the reasonableness of belief in this film.  The positive message that is ascertained in that people have the ability to change their fate manages to conflict with and subsequently undermines what the first 75 minutes of the film set out to prove.  Further, the film really struggles to maintain any coherent sense of reason and often adds new rules to what the Bureau may and may not do whenever convenient to keep the film moving- often times, without any explanation other than “these are the rules.”  For instance, the Bureau cannot track Norris as long as he is surrounded by water.  Why?  To weave the story together, without much rhyme or reason.  That’s without even mentioning the inexplicable time jumps in the film (Two of them!) of “Three Years Later” and “Eleven Months Later,” which rarely works positively in a film’s story.

While the storyline was peculiar, the chemistry between the two was believable and both Damon and Blunt were at their best when playing off of each other’s quips, and exploiting the relationship foibles that any couple could relate to.  Ultimately Damon is presented with the reality that the two lovers would go on to incredibly successful lives if held apart or completely diminished lives if they remain together and he must risk their future success for a chance at love.

The film has a runtime of about 100 minutes, featuring plenty of cameos from politicos like Jon Stewart, James Carville, Mayor Michael Bloomberg and Wolf Blitzer to NBC’s own Chuck Scarborough, and is interestingly shot mostly in lower Manhattan and Brooklyn.  Unfortunately, pointing out streets and signs that you know simply isn’t enough reason to see a film that falls flat, with characters you want to like but don’t necessarily root for.  While entertaining overall, this film is better suited for a DVD rental.