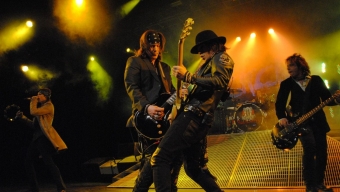 One of the The 2011 edition of the Jagermeister Music Tour stopped locally at the Best Buy (formerly Nokia) Theater in Times Square for an evening celebrating some emerging and established acts in the hard rock genre.  The evening featured four relatively dissimilar acts with some familiar faces, and a night replete with head banging and moshing to please even the casual heavy enthusiast.

The show opened promptly with openers The Damned Things- a quasi-supergroup comprised of two members a piece from Fallout Boy, Anthrax (yes, Scott Ian was one) and Every Time I Die. Although they took the stage early on, the band proved they were able to hang with the rest of the bill, with a short but shredding 6 song set, including crowd favorites “Grave Robber” and “We’ve Got a Situation.”  Vocalist Keith Buckley (Every Time I Die) seemed comfortable on stage, but was a little flat out of the gate.  Nevertheless, the band performed competently as the openers in their shortened opening slot.

Up next was All That Remains, who may have compiled the oddest collection of metalcore musicians in recent memory- a singer, wearing a ballcap and sleeveless shirt, reminiscent of a late 90′s rap-rock type, a guitar player who may have been a 7 foot tall sasquatch for all we know, and another guitarist that more resembled a bouncer at a posh lounge in the meatpacking district, rather than an axeman.  But these visual distractions aside, the band pulls it off live, and they were actually quite good.  Vocalist Phil Labonte is incredibly talented at knowing when to settle down and harmonize and when to harness the Devil inside of him in order to holler demonically.  And the guitar work by the band effectively melted our faces.  The highlight for us was single “Forever in Your Hands,” but other hits like “Two Weeks” and “Hold On” proved just as worthy in their live set.  The band was a welcome surprise for this viewer.

Concert Review: All That Remains

Prior to Hellyeah taking the stage, we were heavily anticipating the arrival of former Pantera drummer Vinnie Paul (also of Damageplan).  As the set began, the excellent Paul was sheltered behind an elevated and oversized kit, but his camouflage from eyesight could not suppress his pounding of the sticks in which our collective ears would revel.  Unfortunately, the rest of the band, featuring members of Mudvayne, Nothingface, and Damageplan left us wondering what was missing, as they capably, but unspectacularly paced the stage.  Admittedly, we were anxious to hear singles “Alcohaulin’ Ass” and “You Wouldn’t Know” live, but the band just simply didn’t do it for us.  Perhaps it was the perceived lack of stage presence of vocalist Chad Gray (who we are fans of) or perhaps the band simply failed to overshadow the prior two acts.  Whatever the case, Hellyeah’s performance which was lauded by some, left us disappointed.

At this point in the evening, the crowd had been sufficiently warmed up, and the intricate stage and ramp had been modified for the arrival of tour headliners, Buckcherry.  We’d be remiss if we failed to question the powers that be who assembled the tour lineup for this year.  After three opening bands serving a more hardcore audience, fans waiting for Buckcherry didn’t know what to expect from the 80′s glam-esque band who’ve written poppy ballads like “Sorry” and “For the Movies.”

But as a band that refuses to be labeled, singer Josh Todd and company defiantly took the stage for a blistering 75 minutes, featuring many of their heavier numbers (Onset, Whiskey in the Morning), hit singles (Lit Up, Crazy Bitch, Everything), and ballads (Sorry, I Want You).  Todd, donning a long brown leather coat, stripped off several layers as he does throughout most shows, before ending up shirtless- revealing a full back tattoo of a playing card- a joker.  Say what you want, but the guy just oozes rock star.  Unfortunately for Buckcherry, they are more a band that you would find playing clubs on the Sunset Strip in 1986 rather than a fine tuned live rock act.  The enigmatic Todd is a tremendous presence and frontman, but due to the vocal strain of the signature high noted Buckcherry songs, and the amount of moving around he does on stage, he frequently fails to hit every note.  But for fans of the music, that’s simply okay with us and we accept them for what they are- just a good time.

The highlights of their set for us included a sped up version of the bluesy “Next 2 You,” and rocking versions of “Lawless and Lulu” from the band’s 1999 self-titled debut, and “Slammin.”  Perhaps even more remarkable was the crowd response to the critically tepid “All Night Long” and “It’s a Party” from their 2010 release “All Night Long.”  It may have been a Tuesday night in Times Square, but Buckcherry managed to make it a party.