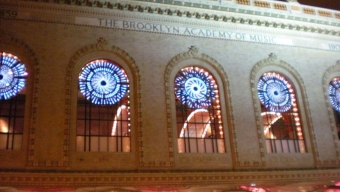 Brooklyn is chock full of historic and exciting points of interest. During the summer you can hop on the F train to Coney Island for a full a day of gorging on hot dogs and riding The Cyclone.  Well, maybe not in that order, but you get my point.  But say you want to take in a night of culture and/or art- be it ballet, classical music, or acclaimed cinema, you may be asking, “Hey Alan, where should I go for that?” My immediate response would be, “BAM!”

No, your friend Alan Smithee is not channeling Emeril, but I am instructing you to head over to BAM also known as the Brooklyn Academy of Music. BAM is located near the Fort Greene section of Brooklyn and is housed in a former opera house.  Both the exterior and interior are nothing short of exquisite. The architecture takes one back to a time when each brick placed on a building meant something. The flawless detail can be seen from all angles. But if you ask me it’s best seen from across the street at night, when all of its lights are illuminated. Travel inside for an even better look at this grand structure. The lobby is a large space with huge ceilings, making for a perfect waiting place before your show starts, as seating is provided.

One of the biggest treasure lies on the second floor of the building. There you will find a huge lounge space with a bar, and ample stage space for bands. This is the perfect place to go before or after an event to mingle and have a drink. On any given night you can catch free jazz music being played live, making BAM a truly multi-purpose venue.  If you want you can spend an entire evening just walking around taking in the venues sights. Well, that is until they close, and ask you to leave.

On any given night BAM can host eclectic bands like Brooklyn favorites, The Magnetic Fields or more highbrow events like the ballet. The former opera space brings out the best for either type of event and elevates them to a higher level. This night, however proved to be a bit different as we would not be attending a live show. Instead, we would be taking in a night at the cinema. If you thought the opera house was impressive as a standalone structure, then you have to see the film setup at BAM.  They are known to play revivals of legendary films, while always keeping the current year’s highly acclaimed films in a constant rotation. On that night we choose to see Darren Aranofsky’s highly acclaimed film, “Black Swan.”

“Black Swan” tells the story of Nina Sayers (Natalie Portman), a professional ballet dancer given the role of a lifetime- the lead in Swan Lake.  This new found success takes its toll on the young woman as she may or may not be at the brink of insanity, without revealing too much.  All that we can suggest is that you make sure to see the film. If you like melodrama, thriller, and yes horror films, then you will find something you like in Aranofsky’s movie.  And better yet- take in a showing at the historic Brooklyn venue where there was a shortage of annoying talkers and cell phone users, which was extremely refreshing considering that patrons at most city movie theaters find it acceptable to chat through an entire film.

So we implore you- the next time you are thinking about taking in some live music or even a movie, it might be time to think outside of the Manhattan box, and head to the friendly borough of Brooklyn.  BAM can deliver something for everyone and we are lucky to have it.  Be sure to check their calendar daily at http://www.bam.org, as events are constantly being announced.