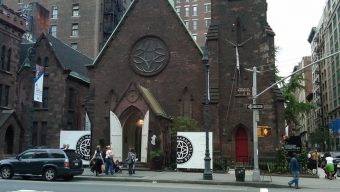 One hundred and sixty plus years ago, the cathedral construction sitting on 20th Street and the Avenue Â of the Americas, likely before it was dubbed Chelsea, served as a religious house as the 1844 Church of the Holy Communion.Â  Fast forward from the 19th century to 1983.Â  A decline in area Episcopal parishioners forced the historic worshipping grounds to inevitably be sold and turned into the infamous nightclub, Limelight.Â Â  For the better part of a quarter century, Limelight becomes a New York City hotspot, and becomes a place to meet people, hear new music, and experiment with recreational drugs.Â  After several attempts to reopen and revive the club as Avalon, it closes for good in 2007.

Enter May 2010.Â  After an estimated fifteen million dollar renovation, the 25,000 square foot church turned club, now becomes the Limelight Marketplace, a relatively little known retail mall, packed with over 60 upscale boutique shops, restaurants, and even a wine bar.Â  The exterior remains from the initial construction- in fact, before entering we were unaware that the market even existed.Â  The dated crimson bricks and steeple only added to our uncertainty.Â  However, the bright white signage at the ground level outside the massive front doorsÂ revealed that we were in the right place, and we entered accordingly.

The floors are checkered black & white with a shine so deep that you can see your reflection from the top of the third floor.Â  Okay, Iâ€™m exaggerating- but they are shiny, rest assured, and they make a nice walking track for staring straight up at the massively high ceilings inside.Â  While the views throughout are breathtaking because of their inventiveness resulting from the utilization of such a beautiful space, the true beauty lies in the fact that there is something for everyone inside.Â  From high end clothing and jewelry to casual wear and candy.Â  Even a quasi t-shirt & cartoony store sits high on the top floor, near the marketâ€™s salon.Â  And even though the idea sounds a bit clumsy, the entire experience comes off as tasteful.

With a cacao chocolate bar and a (coming soon) Grimaldiâ€™s Pizzeria inside, an art gallery, and a garden, all on premises- coupled with everything else weâ€™ve described- as a New Yorker, donâ€™t you at least owe it to yourself to check this place out?Â  Desserts and coffee, a candy wall, a Hunter rain boot shop, and Sophie & Teddyâ€™s Doggie Delight too?Â  Count me in.Â  Just writing this makes me want to go back.Â  All hail the cathedral of consumption!

Here are just a handful of shops on hand at the Limelight Marketplace:

And while some are more affordable than others, we encourage you to indulge!