EVE 6′s Max Collins Sits Down for an Interview with LocalBozo.com 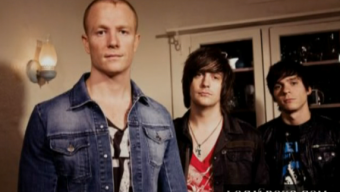 Inconceivably, it has been more than twelve years since EVE 6 made a name for themselves with the release of their self-titled debut album.  For many of us, their iconic singles “Inside Out” and “Leech” from their 1998 release, coupled with the songs “Promise” and “Here’s to the Night” from 2000’s “Horrorscope” all had a prominent place on the soundtrack of our adolescence.  From faded high school relationships to stumbling home college flings, EVE 6’s catchy, alternative anthems have served as the backdrop for our growing up.

After a brief hiatus following the release of 2003’s “It’s All in Your Head,” lead vocalist/ bass player Max Collins and drummer Tony Fagenson dissolved the EVE 6 moniker and began performing as “The Sugi Tap,” playing shows mostly in southern California and Arizona.  While being sidetracked by playing so many local shows, the desire to begin releasing new music began to surface and thus, the band again changed gears- hiring guitarist Matt Bair to replace the departed Jon Siebels (Monsters Are Waiting)- and reform under the EVE 6 name.

More recently, the band has been plugging away in the studio, posting videos called EVElogs, with live performances, rehearsals and recording sessions, and straight to viewer video clips from life on the road, as they continue to nail down the tracks for a forthcoming and still untitled new album.  The lack of a current record deal has not allowed the band’s work ethic to diminish as they work toward repeating their prior successes.  The newly released, raw recording track “Lost and Found” resembles the band’s familiar sound, so fans can be sure that the band won’t stray too far from what’s been proven to work for them.

On November 1st, EVE 6 will play locally at the Mercury Lounge.  With the early show (6:30pm) completely sold out, the band added an uncharacteristic late show at 9:30pm for a doubleheader of live music.  At only $15 a pop, the tickets for the late show are sure to sell out, so make sure you secure your tickets today (www.mercuryloungenyc.com), as the band plays two of the three slated shows on their current tour here in New York City.  And if you are going to the early show, LocalBozo.com was able to score an exclusive interview with lead singer and bass player, Max Collins who has assured us that the band plans on switching up the setlists in between shows that night, and performing some new songs live as well.  Make sure to listen to our interview with Max (above), as he discusses amongst other things: reforming EVE 6, recording a new album, his biggest musical inspiration, challenges in the music industry, and his memories of playing in Manhattan.  For touring information or to find out about all things EVE 6, check out www.eve6.com.