Who Said Tours are Just for Tourists? 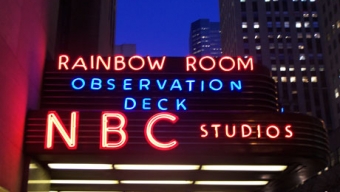 Another tour in New York City, you ask?  LocalBozo.com has it covered as we embarked on the official NBC Studio tour from Rockefeller Plaza.  Unfortunately for us, our tickets were for the 6:30pm, Friday evening tour and after a long day of tourists and large groups, it was evident that the NBC pages that would be walking us through the hallways of NBC were a little worn out from a long day of work.  Nevertheless, the building’s rich history kept us energized and excited to see what would come next.

Although NBC encourages participation and interaction on its tours, they do not allow photography and while we snagged some pictures in the Store and Digital café, to see the actual studios themselves, you’ll have to take your own journey through 30 Rock’s hallowed halls.  The tour began prior to the 6:30 start time, when 24 likeminded tourists (3 from LocalBozo.com, 21 from foreign countries with their kids) lined up in a designated area, watching an episode of Friends as we waited to enter a screening room.  At that point, we were shown a short film hosted by Matt Lauer & Meredith Viera chronicling the history of NBC- from its humble beginnings in radio to the Tonight Show and all of the sitcoms and dramas created in between.

After the movie, we were taken in two separate elevators upstairs and got a glimpse of our first real TV set- the studio for the Dr. Oz show.   Interestingly enough, the show is taped in the former “Late Night with Conan O’Brien” studio, which had been given a complete facelift.  The front of the stage is like any other, however the front, center portion for the audience, known as the pit, is on a rotating stage that follows Dr. Oz wherever he roams in the studio space.  Additionally, the far side of the room holds an active working laboratory for Dr. Oz’s live, on-air  experiments, which as the tour guide mentioned, is the “only working lab on daytime television.”  Impressive, considering I wouldn’t know who Dr. Oz was if I hit him with my car.

From there we moved to the Football Night in America studio, which is home for NBC’s Sunday Night pre-game show, for the weekly national game of the week.  The space here was not as big as I’d have thought, considering the number of panelists and guests that typically appear on the show.  This studio was formerly used as a platform for game shows like Concentration, but now is outfitted by a sleek NFL set that can show 12 games consecutively, and has a large up to the minute scoreboard for every game on the docket and fantasy football notable stat lines.  It’s also worth mentioning the large ticker that lines the sides and back of the studio, showing a live scroll of scores for all of the games played.

Since the NBC Nightly News and Late Night with Jimmy Fallon shows were either in progress or had just finished taping, our next and last studio stop was at the Mecca of entertainment for this writer: Studio 8-H, or as it’s commonly known, the set of Saturday Night Live.  The hallways were lined with stills from the prior season and a cavalcade of the celebrity hosts that contributed.  Much like any other television studio, the diminutive size of the set was a true revelation, considering how the show is shot.  Literally every space of the floor needs to be used.  The main stage, which is a smaller version of Grand Central terminal (which rumor has it, will be converted into a Coney Island set eventually) was remarkable to see in person, as was the left stage for the week’s musical guest.  Our guide explained that tickets to the show are some of the hardest to come by in all of entertainment- in fact, there used to be a 20 year waiting list for show tickets (either dress rehearsal, or the live show itself) and when NBC found itself having to call next-of-kin for tickets, they decided to go with a random lottery instead.  But requests are only accepted through e-mail (snltickets@nbcuni.com) in the month of August, and you cannot select which show you attend.  Nevertheless, this was the highlight of the tour for this writer, and even though there were no cast members around, I found myself star-struck by the sheer history of comedy brilliance from the storied past at the Saturday Night Live set.

The final stop on our tour was a fan friendly, interactive Weekend Update set, where two volunteers were able to read a news and weather report from teleprompters, while the rest of the tour group watched and subsequently ridiculed them.  It was a fun way to finish up the hour long tour and gave a couple of enthusiastic guests the chance to revel in the spotlight, albeit on a smaller scale.  Of course, once the tour concluded, we were given the chance to purchase some 8x10s of some pictures taken earlier in the tour, and the news & weather reports were taped and offered for sale on DVD to the lucky two participants.  Both declined.

The NBC studio tour is typically reserved for tourists, but at $19.25 per ticket, it’s a fun way to spend an hour and get a taste of local flare, when seemingly all other entertainment has shifted to the opposite coast.  For tickets, check out: