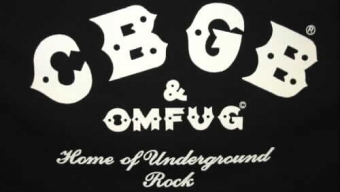 Once a legendary stomping ground for emerging new artists, CBGB (Full Name- CBGB & OMFUG or Country, Blue Grass, Blues & Other Music For Uplifting Gormandizers) became a New York institution for new music that was a home for punk bands like The Misfits, The Ramones, and Patti Smith in the 1970â€™s and 1980â€™s.Â  Opened in 1973 at 315 Bowery, the club was a haven for the New York underground rock music scene and was the precursor for what would eventually become punk music.Â  The club notably hosted the first American performance by The Police in 1978 and in the 80â€™s, the club would play host to something called â€œThrash Dayâ€ Sundays.Â  These matinee performances featured different hardcore punk bands throughout the entire day for a cheap ticket price.Â  Of course, the list of celebrity names and bands that played at and attended shows at the renowned venue are endless, adding only to the infamy of the dingy, dirty rock scene at the Bowery in the 70â€™s and 80â€™s.Â  The folklore and time honored history of the clubâ€™s hallowed halls has allowed the CBGB brand itself to flourish long after the clubâ€™s closing in October 2006 amid disputes of overdue back rent, and has allowed an innovative designer an attempt at preserving rock history while branding his own clothing line.

Enter John Varvatos, who opened his boutique store in April 2008 in the iconic space, in an attempt to preserve the essence of the clubâ€™s celebrated past.Â  Critics charge that the famed designer may be overwhelmingly self-serving and decry the fall of the Bowery, but had Varvatos not entered the picture, who knows what the space would currently look like.Â  The entire Bowery area has been purified with fancy restaurants in place of flophouses and suits and ties in place of the homeless and fall down drunks. Â Entering the store for the first time since its opening, it is evident that Varvatos clearly recognizes the importance of CBGBâ€™s tradition in the ever-changing neighborhood.

The store itself is not all that big, but the walls are smothered with history- from the stickers and flyers pasted on the walls from the CBGB days, preserved and covered by glass casing, to the bevy of animated concert posters adorning the entire store.Â  Varvatos even retails used amps and guitars, and vintage leather jackets and concert t-shirts, albeit at a hiked up price.Â  The front of the store features some legendary vinyl albums for sale and a display called â€œLive From New York: A Decade of Portaitsâ€ featuring stills of Saturday Night Live show hosts over the past decade, from the official SNL photographer, Mary Ellen Matthews (running through 8/3).Â  Just behind the menâ€™s jewelry case, which we were admittedly priced out of, lies a stage equipped with a drum kit and classic guitars and a seating area of plush couches, chairs, and a coffee table, which houses classic music oriented coffee table books.Â  The back of the house showcases a variety of different shoes and sneakers and several dressing rooms.Â  These of course all accompany the high end clothing line of rock-star like gear- blazers, comfortable hoodies, thin t-shirts, and hipster pants, a perfect fit for the store- not so perfect for a casual dresser on a budget.

Unfortunately, CBGB itself is gone forever.Â  The bands that were bred there and their influences on punk music, even today will not be forgotten- the walls of the building, the small space, the fast music, and biting song lyrics- all fueled a movement in New York in the 1970s and 1980s. Â Â But kudos to Mr. Varvatos for taking the steps to conserve and preserve the unglamorous, but historic pieces of what made CBGB a special and iconic place and served as the breeding grounds for what was to become punk rock music.

Check out our own Seymour Winterbush’s take on CBGB.