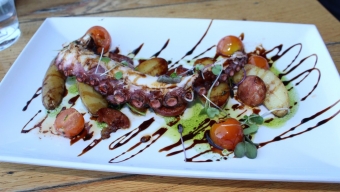 Since Hurricane Sandy ravaged the shorelines of the East Coast, New York City has experienced a serious dearth of viable waterfront bar options down in the Financial District – this, despite the fact that the South Street Seaport is seemingly a goldmine as far as attractions for out of towners to frequent.  Fortunately the picturesque views of Brooklyn across the water no longer need to be put on hold with the open air Industry Kitchen now planting its flag.  Hidden underneath the bustle of the FDR Drive, the bar/restaurant combo provides some outstanding sunset views of the pristine waterfront, just far enough removed from the nearby buzz of ferry traffic and the footsteps of tourists.  The place is an absolutely ideal happy hour destination for downtowners, where the festive music, vibrant atmosphere and outdoor charm combine to deliver a distinctive experience for a smattering of after-work types.

As the East River water splashes against the shoreline and a litany of joggers’ sneakers smack the nearby pavement path, our outdoor table is decorated by the sights and sounds of springtime weather.  The smell of wood-fired pizzas and the sound of Beyonce tracks sprinkle in the background while our 6pm arrival is seemingly a bit late for the groups of Wall Streeters already imbibing in the adjacent bar space.  Above the typically wooden tables outside sits a line of umbrellas to shield guests from the sunshine, a situation we quickly rectify by having them lowered down so that our sunglasses can effectively be raised.  The breeze of early spring however allows for some fiery heat lamps to be utilized on this night, as the denim clad waitstaff casually hustles between tables without appearing to be overwhelmed.

At Industry Kitchen the menu isn’t too expansive and as such, the restaurant never tries to pretend it’s something that it is not.  Shakers of salt and red pepper flakes sit on each table like you might find at a local neighborhood pizzeria, though the place serves far more elevated fare than that would otherwise imply. Items like the garlicky “Pot of Mussels” ($17) and the “Blistered Shishito Peppers” ($9) stand out to earmark as such.  But despite the promise of ‘wood-fired’ fare, it was the rest of the menu that left our party most satisfied.

First, the “Chargrilled Octopus” ($13) was perhaps our favorite dish of the entire evening.  Replete with slices of cured chorizo and garlic (and decorated by some simplicities like olive oil and oregano), the tender hunks of each tentacle were deliciously charred and nicely prepared.   The “Grilled Cauliflower Steak” ($13) was similarly spectacular, with a mouthwatering caper lemon relish adorning the nicely cooked fresh white vegetable, enhanced by a memorable pecorino bread crumb crust which tied the entirety of the starter dish together.  And while the pizzas certainly provided some fodder for our group to dig into with piping hot sharable plates, the flavor profiles of the “Margherita” ($15) and the “Herbed Goat Cheese” ($18) varieties were satisfying but far from transcendent.  Granted, the “24K” pie with 24 karat gold leaves, platinum Ossetra caviar and some foie gras was a hard pass for us with its $2000 (!) price tag, it was likely the best of the some ten different styles being offered.

Although the pizzas are certainly serviceable for picking, we’d instead urge a look toward the wood fired oven dishes where the “Grilled Miso Marinated Salmon” ($26) was a definitive standout.   Seaweed salad and potato curls joined the nicely seared filet, ensconced in a meshing of tomato, ginger, pineapple and jalapeno salsa; the combination of which all worked together in excellent fashion.  With each passing course, we thoroughly enjoyed the entirety of the experience, clinging together the glasses of the chilled pours of Sauvignon Blanc amid the outdoor New York City air as darkness began to envelope the Brooklyn skyline.  Though eventually it was too dark to photograph, the views from our table at Industry Kitchen were sufficient enough to warrant a return visit before word gets out about the place’s almost secret location.