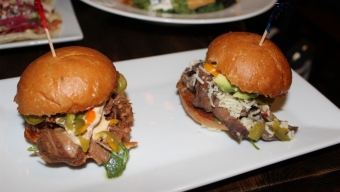 Though the story from pop-up shop to brick-and-mortar restaurant today seems almost commonplace, conceptually, the rise was almost nonexistent just a few short years ago.  Among the pioneers in this space on a local level, Mexicue began its quick ascent as a food truck in Brooklyn in 2010- an impetus of sorts for the gain in acceptance that trucks would soon have as a medium to deliver quality food quickly to discerning and in-the-know consumers.  The truck’s success coupled with a clientele now embracing terms like ‘locally sourced’ and ‘hormone-free’ alongisde a healthy and undying love for Mexican fare, spawned Mexicue as a viable New York City brand.  And a recent visit to their Flatiron location revealed that despite some initial expansion stumbles, Mexicue feels like they are just hitting their sweet spot delivering delicious flavors and a festive feel inside of a spacious neighborhood locale.

Inside, the Fifth Avenue space could double as a craft beer bar or even a more intimate sports bar.  Adorned with a rustic feel, the slightly dim lighting but energetic atmosphere is warm and inviting.  Not to mention the fact that the restaurant has an oversized list of Tequilas and Bourbons- one that would make most other cocktail bars flush with embarrassment.  The tables are wooden, comfortable and nicely spread out around the dining area so that there’s no fear of smashing arms with a fellow patron- there’s plenty of room here to stretch out your limbs, always a good thing when potentially overindulging and letting out one’s pants.  The farm-like vibe here is important because while Mexican is an integral piece to the restaurant’s theme- barbeque is also a fundamental part to the brand’s joint inspiration.

Though the menu boasts the typically overstuffed burritos and even a handful of flavorful enchiladas, it’s items like the “Burnt Ends Chili” bowl ($15) that immediately strike our fancy.  Richly sweet and savory hunks of crispy marbled meat is ensconced in thick ‘cue sauce, atop a smattering of fresh kale, perfectly prepared brown rice and some slow-simmered black beans.  The salty and crunchy layer of thin tortilla strips proves to be a delicious textural contrast to the piping hot dish, where the array of colors on the plate are matched by the simple yet complex amalgamation of flavors.  Moreover, though we went wild for a trio of generously portioned corn tortilla tacos (the “Blackened Fish” ($4.75) with watermelon radish and slaw and the salsa verde coated “Brisket” ($5.50) were our favorites), the sliders were equally as eye-opening.

Outrageously hearty, the $5 “Braised Lamb” was decidedly best-in-show, given the tender and seasoned slices were outfitted with fresh mint and a dollop of tangy chili tomato sauce.  Just a touch of crema decadently spruced up the sizable sandwich, which we ranked the tiniest notch above the “Avocado Chicken” ($4.75) style.  No slouch in its own right, the slaw covered shreds of chicken were complemented by a smoky and creamy chipotle sauce and some house-pickled peppers.  Both options were served within the confines of a warm and fluffy bun that proved to be the ideal measurement for a bread-to-meat ratio.  We would of course be remiss to not mention the refreshing ‘Seasonal’ “Jungle Juice” ($10), equipped with a fall-friendly apple pear flavor which paired perfectly with some excellent “Charred Jalapeno Guacamole” ($11.75), a quickly lapped up starter dish accompanied by some satisfying and salty tortilla chips.

There’s no need to name names.  We can all agree that finding a fast-casual spot that serves up run of the mill tacos and burritos is hardly a difficult exercise in New York City, where traditional Asian cuisine and Mexican food is routinely being served inside of the same take out window.  But Mexicue is seemingly a far different animal with a more diverse and eclectic array of affordable offerings, an energetic bar scene and an atmosphere that begs you to stick around awhile to really enjoy the preparation and culinary thought being put into each dish.  And that beats the hell out of waking up on your couch, covered in tortilla chip crumbs, wondering what it was that you just devoured without thinking.