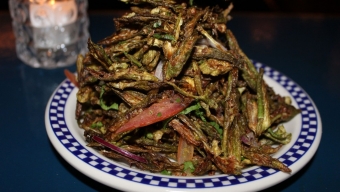 Settled into a ground floor space on surprisingly quiet Kips Bay corner sits The Royal Munkey, a nicely sized place that might leave you second guessing that you’re actually inside of an Indian-inspired restaurant. Sister restaurant to uptown’s The Drunken Money, the 25th Street version brings with it many of the same unique qualities- namely an approachability for more casual diners who might normally be scared off by the flavors and ingredients associated with traditional Indian food. The Royal Munkey meshes European style cooking techniques with classic Indian fare amid an intricately decorated cocktail bar setting in a way that somehow manages to work quite well.

Once inside the spacious restaurant space, it’s difficult to avoid having your attention shift at the many decorative pieces strewn about the interior where there are monkeys seemingly everywhere. From the eye catching wallpaper to the small table lamps to the framed photos on the wall, the charming knick-knacks will keep you gazing around the room even in the midst of your dining experience. The monkey bellhop statuette welcoming guests inside is also admittedly a nice touch. Much of the space meanwhile feels classic without being old fashioned. The brown leather banquettes and royal blue walls make for a pleasing contrast to the golden colored wallpaper amid the dimly lit setting. 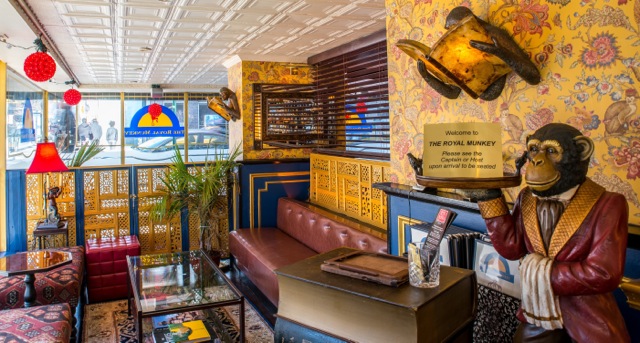 The bar is littered with bottles of spirits and the mixologists here are capable of serving up some serious drinks. A dated Indian-language film appears on loop on the television behind the bartender as we wrap our lips around concoctions like the “Indian Spiced Old Fashioned” ($13) made with a touch of silky spiced gomme and the “Dark N’ Stormy” ($13), served subtly sweet with cane sugar and candied ginger. Though the place is certainly destination worthy for its drink menu alone, the feast that we were set to enjoy was no joke, and fittingly enough for the neighborhood, is served into the wee hours of the morning.

Our mouths were immediately left agape by the deliciously seasoned “Crispy Okra,” a must order for any visit to the restaurant. The heaping serving, priced at just $5, was neither oily nor overly salty and once we figured out that they could be eaten with our hands, we immediately began to crunch our way to making a dent in the sizable plate. The entrees would roll out soon thereafter. We marveled while dipping warm pieces of naan into the thick rich broth drowning the “Sindhi Fish Curry” ($18), a dark brown bowl of flavorful and tender monkfish. Each saturated tear of bread was covered in fenugreek sauce, adding unique elements to our meal between spoonfuls of saffron ghee rice. And speaking of rice, the “Munkey Chicken Biryani” ($17) revealed a swollen casserole style casing covering up a starchy pot pie with enough hunks of piping hot chicken, rice and yogurt to sufficiently satisfy two dining guests.

Somehow, the starring dishes of the evening were still to come. The “Butter Chicken Tikka Masala” ($18) was a fantastic take on the Indian staple laid out in a creamed tomato sauce in such a way that was far more complex than its basic recipe might imply. Less adventurous eaters might just be swayed into ordering this style of food more frequently if given the chance to taste The Munkey’s twist on the traditional dish. Be forewarned, the same rules do not apply to the place’s “Goan Pork Vindalu” ($19), a dish that we were warned was among the spiciest on the entire menu. Though the plate’s spicy chili vinegar tomato sauce certainly had us reaching for gobs of naan and sips of water, there’s no reason to be scared off by the succulent cubes of pork shoulder bathed in the thick fiery sauce.

Whether you call it Kips Bay or Murray Hill, even the most passionate area residents will tell you that the neighborhood has undergone a nice little transition in recent years. Sure there are still some of the ‘Bro-Heavy’ bars that we all visited in our youth, but little pockets of worthwhile bars and restaurants have also been popping up in the high 20’s and low 30’s. Though other spots are likely to receive more praise, The Royal Munkey offers a distinctive combination of cocktail bar and restaurant that definitively can’t be found on every corner. With a dearth of activity in the surrounding blocks, the place is one that is worth seeking out and fortunately between the delicious eats and refreshing drinks, you won’t be forced to go anywhere else for a nightcap once dinner has concluded.