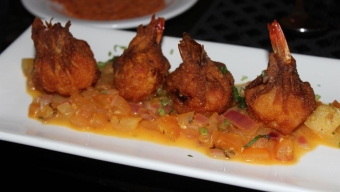 Affixed to the corner of Clinton and East Houston Streets sits Ariel’s Latin Bistro, an authentic tapas-centric restaurant built around the tenets of flavorful small plates and strong delicious drinks. The cold-air wintry months won’t allow for the space’s sizable windows to open up to the bustling streets of the Lower East Side, but the restaurant’s funky décor and intimate interior allow for a festive and modernized experience built around the place’s traditional fare.

Ice cold and hand-crafted “Caipirinhas” ($12) sat atop the brown marble bar counter-top with hunks of fresh fruit and ripe lime jutting out from the otherwise foggy liquor-laden glass. Deliciously sweet, the bartenders at Ariel’s clearly had a knack for inspired mixology, which also would feature a “Classic Mojito” ($12) as a star cocktail. The space meanwhile is decidedly cozy, dimly lit on this weekday evening with the dark table and chair pairings carefully spread around the room are effectively showcased by the black candelabras that sit over the long and narrow bar space. Though we’re seated at a communal high top in one of the room’s narrowest nooks, it somehow suits us just fine as we people and plate watch for the next two or so hours.

Though the menu is described as tapas, featured items like Tacos & Empanadas, Arepas and Sandwiches are immediately eye-catching during a quick glance at the selection of offerings. Eschewing the requisite “Quesadillas” ($8) filled with either chicken or steak, the seafood dishes often shone brightest at Ariel’s. The savory and crispy flash fried “Fish Tacos,” ($9)- tender and flaky paired with a lacing of pickled red onion strands- and the decadent pouches of “Shrimp Dumplings” ($10) served in a shallow bath of mango, apple and roasted garlic salsa were two of the evening’s earliest highlights. Meanwhile, the balance of carrot puree and red cabbage allowed the perfectly cooked pairing of “Seared Shrimp and Scallops” (a steal at just $13) to similarly stand out, washed down by a cool wave of fresh mint fueled Mojito.

The evening’s richest serving though belonged to the classic “Sandwiche Cubano” ($12.95), a massively decadent portion that enveloped tender pernil, ham, Swiss cheese and a sour pickle between a fluffy sourdough loaf. A smooth spread of creamy aioli delivered just the right amount of balance to counteract the salty cured meats stuffed inside, enhanced by the slight crunch in each bite of its crispy bread shell.

There’s plenty to sink your teeth into at Ariel’s Latin Bistro, from some heartier entrees which are on tap for our next visit, to some expertly crafted mixed drinks by the place’s raven-haired bartenders. But whether you’re coming to dig into some shared plates with a small group or to enjoy an intimate dining experience in the vibrant neighborhood, the festively modern décor and welcoming setting make each dish that much more enjoyable.