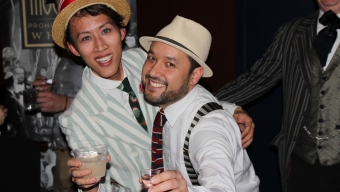 Braving a precipitous temperature drop this past weekend, hundreds of revelers kept themselves warm with promises of delicious pours of craft brews and a selection of distinctive spirits inside of Webster Hall’s sprawling four floor space. Turning back the clock to the 1920’s, an afternoon of tasting brought big band music and a burlesque show along for accompaniment as guests enjoyed a four hour transformation back to the prohibition era. 2016’s East Ville Des Folies would commemorate the 130 year history of the venerable New York City institution, and though it was far easier to secure a drink on Saturday afternoon than it was back in the days of yore, the spirit of the era was very much alive.

A line of VIP ticketholders stretching around to 4th Avenue would await even early arriving attendees, but to their credit, the staff worked dutifully to keep everything moving along quickly. Once inside, guests were handed a commemorative tasting glass and a program guide before starting out on one of the four dimly lit floors featuring beers, ciders and whiskey offerings. Candidly, much of our afternoon was spent in The Grand Ballroom, where scintillating performances from scantily-clad ladies would grace both the stage and in the air overhead and Michel Arenalla and His Dreamland Orchestra swooned the standing room crowd throughout the day.

In a new twist this year, the Citi Speakeasy became a highly sought after respite for some light bar fare and mixed cocktails. Guests could simply flash a Citibank credit card and gain access to the private area space, being regaled with similarly appropriate music and intimate stage performances. After downing a particularly tasty Gimlet and an Old-Fashioned, it was time to set our eyes upon the feast of brews being poured just outside of the Speakeasy’s soft curtain. From small microbrewers to some of the most dominant names in the craft beer industry, there were tastes for all to enjoy during the afternoon. Familiar brewers like Sixpoint, Lagunitas Brewing Company and Guinness were situated near the likes of Sweetwater Brewing Co., Montauk Brewing Co., and Small Town, makers of the recently exploding (and alcoholic) “Not Your Fathers Root Beer.”

Stratford Connecticut’s Two Roads Brewing Co. has become one of our favorite local brewers, with a nice selection of easy drinking styles and we returned for pours of their “Worker’s Comp Saison” more than once. Deliciously crisp, the orange-fueled nose and light gold color went down remarkably smooth, yielding just a faint hint of spice in its finish. Similarly tasty, we quickly found the Oskar Blues table where we’d previously enjoyed their “Dale’s Pale Ale” and “IPA” plenty of times. The “Pinner Throwback IPA” however, offered up plenty of pine on the nose and hops on the tongue- and yet, it was also consistently smooth. American style IPAs can often be polarizing but this “Throwback” was an approachable entry for those who typically avoid the genre- one worth seeking out to break some of your friends into Pale Ales.

As always, fruit forward beers also proved to be wildly popular. Low on alcohol but incredibly sweet, “Schofferhofer Grapefruit” was probably our favorite ‘beer’ find of the last twelve months and since then, we’ve seen it at parties, tailgates and summertime cookouts seemingly everywhere. Fortunately, the beer was also prominently positioned at East Ville Des Folies and the friendly rep had no qualms about filling our glasses time and time again. A slightly sour “Strawberry Lambicus” from Brouwerij Timmermans was another addition to an already strong lineup of flavored beers. At 4% ABV, the sweet brew was pleasantly strong, nicely carbonated and proved a nice change of pace to some of the heavier styles like Shmaltz’ “Hop Manna IPA,” 21st Amendment’s “Brew Free or Die! IPA,” and Charles Wells Brewery’s “Young’s Double Chocolate Stout,” upon which we were imbibing for much of the day. Alphabet City Brewing Co.’s “Easy Blonde,” Belhaven’s “Twisted Thistle IPA,” and Downeast Cider House’s “Original Blend” also proved to be some of our favorites as the afternoon turned to early evening- and the day of drinking began to catch up to us.

We spent the last remaining hour perusing the whiskey selections being doled out inside The Marlin Room and in The Studio, where music was being belted out by the talented Molly Ryan Quartet. Sipping on a variety of helpings from the likes of Knob Creek, Four Roses, and Drambuie seemed to put us over the edge- though not before the pour of Woodford Reserve’s “Reserve Rye” hit our lips as perhaps the most memorable sample of our day. Unbelievably minty, with a touch of clove and malt, the smooth honey pour was one that was so memorable that we snapped a (blurry) photo of the bottle before heading back to the coat check and out into the chilly Manhattan evening. East Ville Des Folies again seemed to come and go remarkably quickly- a fun and festive throwback of sorts for those of us who romanticize about those times in history that we’ll never again have the chance to experience. At least, not until this annual event returns once again next January anyways.