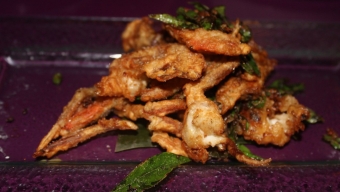 The words Pasar Malam quite literally mean ‘night market,’ but the definition hardly does justice to an intricately designed, small and unique space just off of Williamsburg’s bustling Metropolitan Avenue. The cuisine blends pieces of Indian, Thai and Asian inspired fare, collectively concocted under a decidedly Malaysian umbrella. But the rather unorthodox menu options manage to showcase familiarity with a twist utilizing an array of classic flavors and ingredients amid an exciting setting, re-created with staggering authenticity.

From the outside street, the ornate decor that dominates the interior of Pasar Malam is utterly unseen. Once inside however, the otherwise quaint space is immediately overshadowed by colorful designs, eye-catching murals and a street market style setup that highlights an otherwise dimly lit casual dining area. Nevertheless, the restaurant’s wide open kitchen adjacent to its lively bar invites guests over for a quick look at the team of chefs carefully working the dough of their deliciously fluffy meets crunchy “Rotis” or putting the finishing touches on garnishing one of Pasar Malam’s “Small Plate” before being carefully delivered table-side. Halloween is surely in effect during our October visit, where some skeleton decorations are playfully placed behind the host stand and near the restroom, adding to the festive ambiance inside of the restaurant.

Each table is appropriately affixed with Malaysian style cups and plates undoubtedly, brought stateside to uniformly match both the decor and the menu, which while reasonably priced is also exhaustively large. It’s so diverse in fact that it would likely take you roughly ten different visits (no exaggeration) to sample everything that is so deliciously described within its sizable contents. Although we’ve never been to a Malaysian night market, our experience at Pasar Malam dictated that most of the different courses deserved a try. The housemade “Roti Canai” ($6) for instance, is a seemingly basic flour pancake, but the pan-fried flatbread is meticulously prepared, stretched thin and served warm beside an unbelievable spicy and creamy vegetarian curry. Had our friendly and hospitable team of waitresses not been so knowledgeable, it’s a menu item that we would have likely ignored. And based solely on its deliciousness, we continued with the remainder of our meal based on the suggestions of the house.

The “Butter Garlic” ($12) proved to be equally as memorable. A heaping pile of flash fried soft-shell crab sat perched on a green bed of fiery hot chili garlic curry leaves, which deliciously seemed to get spicier as we reached the bottom of the serving plate. Sizable servings from the ‘Fish Market’ portion of the menu meanwhile were well worth their $18 sticker price as the “Sambal ‘Stingray’” was a revelation. Served enveloped in a green charred banana leaf and beside a pyramid of sticky coconut rice, the large filet of skate quickly separated when touched by a fork, tenderly resembling the texture of pulled chicken. It was perhaps the most approachable seafood dish for those who typically eschew fish and one that even most expert fish eaters would likely enjoy. The “Baba Fish Head Curry” however is a dish best suited for more adventurous types. Chunky pieces of fish head- eyes and all- are drowned in a sea of vegetables and sour coconut milk curry. Meant to be poured over a bed of white or ginger rice, part of the fun is slurping away the creamy broth and locating either the fish’s cheekbone- the meatiest- or it’s eyeballs, the two most sought after morsels according to the staff in each savory bowl. Plucking out some small bones aside, the combination here, especially over rice, is a can’t-miss.

Though we ran out of stomach-space to indulge in the likes of the ‘Noodles’ or ‘Clay Pot’ portions of the menu, the ‘Legendary’ “Beef Rendang” ($15) managed to satiate any remaining hunger pangs just fine. The tender meat is slow roasted for an estimated 4-6 hours and is so immaculately tender that each piece barely manages to remain in tact as it slithers its way out from between two chopsticks. The arrangement of lemongrass, exotic spice and grated coconut shreds atop the coconut milk coated beef hunks worked together brilliantly and its silver serving bowl offers up a simplistic look at an intensely complex Malaysian dish.   As we pressed on through a gelatinous and subtle “Coconut Pudding” and a light, airy “Roti Petronas” ($8) tower, it quickly became clear that our eyes had simply been too big for our stomachs.  In retrospect, clearly some dishes were superior to others- but we sampled a good chunk of the menu options and with nothing priced higher than $20, Pasar Malam is place where the value of your dollar can truly go a long way.  Most of the portions are entirely generous and the restaurant prides itself on using fresh, quality ingredients to ensure that every guest can experience traditional Malaysian market fare as it was intended.  More often than not, we’ll order in Thai or Vietnamese food as has become customary when living in New York City- but after our experience at Pasar Malam, it might be time that Malaysian fare enters in heavy rotation.