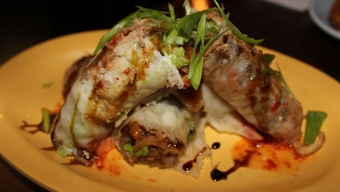 Nestled as a remote spot on a relatively remote street in the heart of the West Village, the restaurant formerly known as Wong made a transformation to perhaps a more appropriately titled Chomp Chomp back in the spring.  Conceptually, the transition would usher in a new wave of casual Singapore-inspired street fare, some that you might find when walking through the country’s iconic hawker stands, grabbing some spicy and inventive dishes as you go.  Here, the seating and layout is a bit more traditional despite a menu rich with complexities.

With some cultural music piped in overhead, it’s difficult not to be immediately pleased by Chomp Chomp’s unmistakable charm.  The small but home-style place is laid out with wooden classroom stools lining both the small bar area and much of the restaurant, where the worn wooden floor and white brick walls both lend themselves to a clean-looking setting in the dining area, enhanced further by the natural light peering in during our early weeknight visit.  Though it’s relatively quiet now, the seats are almost entirely filled by the time our check is paid- a testament to the fact that while the restaurant is sufficiently hidden by Cornelia Street’s quietude, it’s hardly a secret to the neighborhood locals.

The menu here leans on a variety of culinary styles- namely Indian, Thai and Chinese- but is decidedly Singaporean given Chomp Chomp’s penchant for delivering approachable and affordable spice-fueled fare.  Meant to be shared family-style, there’s nothing offered at the restaurant that exceeds $17, giving guests the opportunity to sample at will without worrying about being burned by a costly evening out.  Not at Chomp Chomp though where it seems that special attention is paid to the fresh and authentic ingredients being used to recreate the true ‘hawker’ experience.  The country’s traditional summer rolls for instance- or “Popiah” ($8.5)- tightly wrapped fresh hunks of tender shrimp, jicama slaw and snow peas in a floury crepe, doused with a drizzle of sweet and sticky sauce dollops.  The “Hah Zheung Gai” ($10.5) or ‘chicken wings’ are also meant to be quickly grabbed by hand and devoured.  Bulbous and meaty, the chicken is deep fried and sauced with shrimp paste, garlic and fiery chilis yielding a crunchy textural component that is quickly overshadowed by a wave of heat and spice.

The most complete dish on the Chomp Chomp menu though was the super delicious “Prawn Mee” ($13), a generous portion of some of the tastiest warm broth drowning meaty shrimp, savory spare ribs and a handful of tangled noodles.  The piping hot brown shrimp broth was savory enough to be slurped up on it’s own, but also added immense flavor to the bowl of accompanying thin and thick noodles.  We were admittedly a bit less impressed by the likes of the “Soy Duck” ($16) and the roasted “Hainanese Chicken Rice” ($14), but only because their predecessors were so superior.  The poultry dishes were nicely cooked with their skin nicely coated in a subtle but flavorful soy sauce.  Each was remarkably juicy and tender but given the remainder of the menu, dishes utilizing more intense flavors like coconut sauce, curry and anchovies would have probably catered to a more well-rounded meal given our table’s palates.  But on protein alone, the dishes worked out just fine.

Chomp Chomp was buzzing with guests by the time our final serving of “Goreng Pisang” ($7) reached our table.  The crispy deep-fried banana fritters were sprinkled in chili flakes and sea salt and served with a heaping scoop of vanilla ice cream, effectively marrying the contrast of warm and ice cold, sweet and savory- a consistent theme throughout many of the courses that we would sample.  The music continues to pump its way through the restaurant’s speakers as our meal concludes making it a bit more difficult to converse inside of the now populated restaurant.  But given the quaint West Village block, the festive atmosphere inside is exactly what you’d hope to find at a place that exudes such authenticity.  Managing to maintain affordable prices amid a menu of approachable fare seems paramount to the identity of Singapore food and it’s one that Chomp Chomp certainly celebrates in most satisfying fashion.