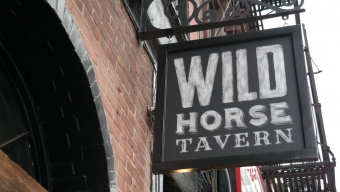 Walking into the Wild Horse Tavern is like walking into the best version of your college apartment â€“ and I mean that in a good way. Lining the walls are huge black and white posters of rock stars, the beverages are neatly displayed, and thereâ€™s a playlist with the likes of The Clash and The Rolling Stones playing. The space has the look of being pulled together without trying too hard. Rustic wooden benches sit beside the bar in the front portion of the space. Beyond a small half-room divider is a banquette and some additional tables, easily moved out of the way in case a dance floor needs to be made in front of the stage.

While beer is usually the go-to choice in a rock bar â€“ and they have a nice selection on tap â€“ the cocktail list was too inviting to pass up. “The British Invasion,” served in a classic champagne glass, combined gin with its old friend lime juice and got pumped up by some cucumber, mint, and just a hint of sweetness. At $8 during happy hour, this is a good one-cocktail-night choice, but we enjoyed the “Whisky A Go-Go” so much that weâ€™d splurge on the whole $12 regular price for one or three. Mixed with lemon juice, sage, and ginger, this is a great summer option for those feeling a Manhattan is seasonally inappropriate. The bar also has a respectable wine offering, which even includes a rose. This is the Upper East Side, after all.

Speaking of, Wild Horse Tavern smartly borrows from the type of neighbors we all wish we had, serving pretzels from nearby Sigmundâ€™s ($6) and hot dogs from Schaller & Weber, the latter fried and served with a spiced onion jam and mustard ($9). The rest of the menu similarly borrows, culturally, from places like Vietnam, the Netherlands, and New Jersey. The “Bitterballen” ($10, $2 each during happy hour) were like crispy balls of shepherd’s pie, which would reasonably be eaten by the dozen during the winter. The “BBQ Tete De Cochon” (which I googled to mean â€œbits of pig headâ€) was a spicy, slightly asian-inspired spin on pulled pork, with a crisp slaw and toasted potato bun. Turns out that “bits of pig head” is really delicious, and goes for a reasonable $11. Combining classic Reuben and Cuban sandwiches, the Tavern also offers the “Reubano” at $14. Including both homemade pastrami and smoked ham, the Reubanoâ€™s salty smokiness finds a little balance with its Swiss, house sauce, and pickled cabbage toppings. The menu also includes a few salads, five entrees priced between $18 and $25, and many other shareable snacks and sandwiches, some of which borrow their own components from other nearby eateries.

Wild Horse Tavern is a great place for a good drink and a quick bite, but so are a lot of places in the area. What most of those are not, however, is a live music spot. Here, a photo of Janis Joplin invites bands up to the small stage at the back of the room. During our stay we were treated to the sounds of the Alan Merrill Band, described by Alan himself as â€œJapan Glam Rock comes to NYCâ€. Despite having a few hits and albums under his belt, a lot of the crowd was hearing his songs for the first time, and enjoying it â€“ which was perfectly appropriate for Wild Horse Tavern, where old things are new again, in a good way.

When to Visit â€“ Happy Hour is from 5-7 and offers a discount on all booze as well as a Burger and a Beer deal for $14. If youâ€™re going to go to a bar with a stage and good sound system, go when thereâ€™s someone to use it. Upcoming music events are posted on the website and include weekly Sunday sessions.

Value â€“ Aforementioned happy hour is a great way to sample the best of Wild Horse Tavern, though the entire menu is reasonably priced with the most expensive item at $25. The cocktails are about standard for the area at $12 each. A lot of the music during the week comes with no cover.

The Lowdown â€“ Wild Horse Tavern is an approachable blend of rock and Upper East Side-edness, without the pretentiousness that can come with either. A casual music venue that you arenâ€™t embarrassed to wear a suit to, it invites both snacking at the bar with a few pints or listening to a set with a few cocktails and a burger. Get at least the pretzel and try any of the cocktails that suit your fancy without any risk of disappointment, and stop in for some serious rock, way above Houston.