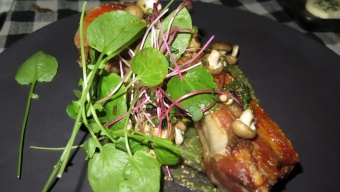 Meeting dining expectations in New York City is often a restaurant’s biggest obstacle. In an era where every Tom, Dick and Herman has their own blog, Yelp or food Instagram account, innovative places are often derided long before being praised. Fortunately at Chef Justin Smillie’s Gramercy restaurant Upland, the atmosphere inside and the fare being plated and served often exceeds expectation. And based on being almost roundly praised by even the snarkiest of critics- both professional and amateur- it remains one of Manhattan’s most sought after dining destinations, despite having been open for more than six months to date.

Slotting our time weeks in advance, we were still only left with a pre-6pm dinner reservation on a recent Friday evening. Though most folks were likely wrapping up a full week of work, the small but energetic bar at Upland was entirely full and abuzz with action. Finding a diminutive opening in the fray, we grabbed a “Sauvignon Blanc” ($11, The Gotham Project) from the friendly bartender before surveying the restaurant’s rustic and modern setting. Large green leather banquettes intricately make up the dining area, where clean white tile and freshly varnished wood paneling equate to a farm-to-table style setup, though the place’s concept might read differently. Upland feels decidedly more ‘Californian’ than it does ‘Italian,’ though the slight inconsistency between menu and ambiance is barely noticed as the massive light fixtures shine down upon another spectacular course.

Though Chef Smillie’s ingredients and dishes are seasonally inspired, the fare here hasn’t changed all that drastically since Upland’s much ballyhooed opening in late October. The mood in the dining area remains relaxed but the clientele here, still buying all of the much deserved hype, certainly feels high-end. It’s funny then to watch other seemingly well-to-do folks washing down a bottle of wine with slices of pizza or picking at “Blistered Shisito Peppers” ($12) at nearby tables- that is, until you feast your tastebuds upon some of the Chef’s truly exceptional dishes.

Among the can’t miss offerings, the “Whole Crispy Mushroom” ($16) is one of the most equally distinctive and delicious things that we’ve ever tasted. The massive hen of the woods is served piping hot, outrageously flavored by a small creamy bed of rich white sauce layered with herbs. Frankly, the oil drenched dish needs little more than a lemon squeeze to really unleash its decadence, resembling crispy potato chips more-so than a traditional style of mushroom. Where Chef Smillie really excels though is with his starter dishes. The “Crispy Duck Wings” ($18), lacquered in yuzu kosho chili paste are sizable enough to be served as an entree, while the “Beef Tartare” ($16) is shaped with puffed farro and served beside an untouched egg yolk in a fashion that gave us pause about devouring such a beautifully presented dish. The “Seared Quail,” while admittedly a bit pricey at $21 for two small pieces, certainly delivered a smattering of succulent flavors as the tender rare morsels were decorated by a plate of green strawberries and tasty spring onions.

Though the in-house crafted “Bucatini Cacio e Pepe” ($17) was nicely smooth, the “Estrella” ($18) was the evening’s most revelatory pasta dish that perhaps best showcases the restaurant’s masterful expertise. The bowl’s generous portion was equipped with shaved parmesan atop thick strands of star shaped pasta, meshing hearty hunks of chicken liver with sage and sherry in a slightly less-saucy serving than a  traditional ragu (also on menu). Meat heavy and perfectly al dente, the strands of pasta and sprinkled rosemary were absolutely phenomenal- one of the best pasta dishes that we’ve enjoyed all year. Not to be outdone, Chef Smillie’s “Crackling Porcelet” ($35) was otherworldly. With a thick crispy skin decorated with grill marks, the man-sized cut of pig’s neck was buried under an array of tiny mushrooms, fresh greens and a thin chimichurri smear. But the accoutrements mattered little to the overall preparation of the meat itself- lip-smacking and salty, rich and fatty, like a pork belly and pork chop married the same dinosaur-sized bone.

Upland was one of 2014′s most widely anticipated openings and Chef Smillie and company have managed to reinforce why with good reason. Some of New York’s best restaurants are ones that cater to both special experiences and to that ordinary night out and fortunately Upland manages to both over-deliver and exceed expectations on both fronts. The menu is approachable and the space is inviting and comfortable, and while the offerings are so tempting that your bill will add up quickly, there’s nary a dish here that is a let down. Whether you are able to get a reservation however, is another story altogether.