The Hall at MP Opens with a Party in Williamsburg 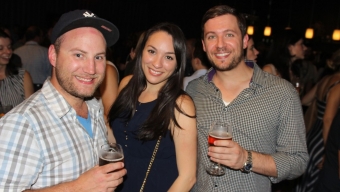 Blog: The Hall Opens in Williamsburg

Hundreds of VIP guests hopped just steps from the L train and into Williamsburg’s newest performance and event space on Thursday night, surrounded by swarms of tasty cocktails and in-the-know thrill-seekers. Nestled in next to his newly opened restaurant MP Taverna Williamsburg, Chef and Owner Michael Psilakis would christen the opening of The Hall at MP with an evening indicative of the venue itself: a live burlesque show, live musical acts, a tarot card reader and a tattoo artist- all of which yielded an evening that was equal parts unique and unpredictable. And with passed around food curated by the chef himself, nobody in the house would be leaving hungry.

The Hall at MP itself has a special feel to it, considering its Brooklyn location. There’s no comparable venue in the Williamsburg area- at least not one that exudes such polish. The exposed brick walls surround the brightly lit space, with plenty of natural light peering inside through the space’s front doors. But on this night, black curtains shroud the interior with an undisclosed mystique as guests enter the festive space and waitresses race to hand them a glass of bubbly Prosecco or a hand-crafted cocktail of their choosing. Meanwhile, Chef Psilakis’ would offer an array of delectable eats from freshly prepared sushi to thinly sliced charcuterie as well as a cavalcade of his ‘traditional Greek with a twist’ style of cuisine laid out buffet style for attendees to help themselves.

Live music from Jackie Greene, The Hollows and Alex Nelson would serve to enhance the positive mood of the evening as well as showcase some of the space’s potential as an intimate concert venue. The evening’s most poignant moment though belonged to Chef Psilakis himself, who for months and months had worked on opening his new restaurant and adjacent event space- both with separate menus mind you. Addressing the now jam-packed crowd from the stage, the chef humbly thanked his many supporters, family and friends for helping him take the The Hall at MP from a dream to a reality.

Some of us hopped into the photo booth for pictures , while some of us had our futures read. Some of us got tattooed, while some of us enjoyed the live music. Our team spent much of the evening gorging on some of the delicious fare- the grape leaves and whole hog were particularly savory- and slurping down tasty “Negronis” and “Moscow Mules” being poured by the evening’s mixologists. Needless to say, like The Hall at MP itself, the evening catered to a multitude of different interests and tastes and after Thursday night’s spirited opening party, it’s now on our radar as one of Williamsburg’s most lavish new openings.