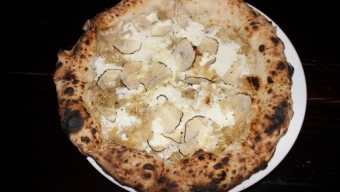 SRO Speakeasy Pizzeria
334B Bowery, located inside Gia (for now), near Great Jones Street, East Village
212-466-3301
Getting There: 6 to Bleecker Street; F to Second Avenue
http://www.sropizza.com/

Single Room Occupancy is the full name for SRO Pizza, New York City’s first pizza speakeasy which opened earlier this year. Though in recent months the restaurant’s exterior transitioned from Tapas style restaurant Espoleta into the Italian-inspired Gia Trattoria (and soon, into Philadelphia’s PYT), it’s the back of the house that’s making the most noise with a selection of Neopolitan pizzas behind a closed dark door. Those not in the know may not even realize that an entire 24 seat restaurant lies behind said door- but the space and changing menu are both secrets that any New Yorker should quickly become familiar with.

Although it’s labeled a speakeasy, SRO Pizza does accept reservations- a nice change of pace to the days of showing up and being forced to awkwardly wait around for two hours for a phone call which never comes. It’s advised that you call ahead to secure your place at one of the casual tables inside the inviting space where a $38 prix-fixed menu promises three courses including one of their savory pizzas. The open pizza oven and smallish kitchen setup sit just to the left of the space’s entry point, surrounded by exposed brick walls, old-fashioned chandeliers and diminutive photos to complete an attractive overall atmosphere inside. There are no windows and dim lighting, but these absences only serve to further the secretive vibe of the hidden neighborhood gem.

The wine list is expectedly minimal given the setting, with little more than a dozen bottles being offered. Fortunately, none exceed $60 here, so you can escape back onto the bustling Bowery street with far more in your pocket than had you chosen to eat elsewhere. Options like traditional “Meatballs” ($8) and “Burrata” ($12) are fine precursors to any meal, but you knocked on this very door to indulge in some pizza and the range of offerings here are vast.

The perpetually changing pies are listed on a small chalkboard affixed to a nearby wall and on this night truffles (courtesy of Urbani) seem to be the tool of choice for the selection being offered. The “Prince St.” ($20) offers up three styles of cheeses- bufala mozzarella, fontina and surprisingly, gorgonzola with a touch of rich truffle honey added to the decadence. The “Union Square” ($25) pie, loaded with truffle cream and carpaccio also hosts shaved artichokes amid its oozing goodness and the combination here is unbeatable. Fun toppings like Brussels sprouts and pancetta top the “Ave. B” (Special) pie, but the evening’s show-stopper is the “Montanara” ($16) or SRO’s mouthwatering ‘fried pizza.’ Delectably layered with Vesevo cherry tomatoes, mozzarella and parmesan cheese, the pie, patterned after Forcella‘s famously made style, offers up a thick, piping hot crust which is deliciously crispy. The fresh tangy tomatoes and silky creamy cheese paired together seamlessly with each crunch of crust, making the”Montanara” a must for any table. It’s among the restaurant’s staple pies with good reason- it really is especially decadent.

Whether popping in for dinner or late night for a quick bite, SRO is fashioning the kind of pizzas that will ensure you leave satisfied. Though you won’t find cocktails here in the most traditional ‘speakeasy’ sense, you’ll find a bit of an undiscovered gem on Bowery. So while other folks are making noise about the more widely known places on the block that are fully abuzz with energy, grab a quieter more casual table here instead, where the pizza is good, the wine is cheap and the atmosphere remains a secret. But shhhh, let’s keep it between us.