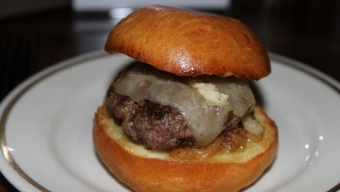 Blending the style of old New York with the class of its modernized neighborhood the newly opened Church Street Tavern brings a much needed jolt of Americana into the sometimes stuffy Tribeca. With its plush leather banquettes and old-fashioned dangling light fixtures, the bar’s main space might double as a speakeasy. But the natural light seeping in from beyond the l-shaped bar area illuminates a staff working on new-fangled craft cocktails and creatively raising the game from your run of the mill neighborhood bar.

The industrial-style setting inside the Tavern- replete with an eye catching staircase as the dining area’s most notable point of decor- works to enhance the comfortable setting, where after work types fling their ties around their shoulders to avoid spilling drinks like the refreshing “Lady Killer” ($16, pairing gin and Prosecco) on them. Other standouts like “The Rhubarb” ($16) prepared with vodka, lime and cucumber and bourbon and berry heavy cocktail “The Elvis” ($16) are equally as satisfying. Though the dinner menu here is littered with some savory fare- namely a “Beer Can Chicken” for two ($54) and a whopping 32 ounce “Royalton Farms Ribeye” (MP), one item in particular makes Church Street Tavern a dining destination for folks outside of the surrounding neighborhood.

Vaulting itself into the conversation of New York City’s very best hamburgers with immediacy, the “Tavern Burger” ($19) is already becoming one of 2015′s most widely lauded dishes. Weighing in an eight ounces- the perfect weight by our estimation- Chef Ryan Steen‘s use of bacon-onion relish and a touch of beef heart brings an already perfectly cooked burger to elite heights. The fluffy brioche bun is deliciously saturated with squirts of dry-aged burger juice and remnants of the oozing Vermont cheddar bring the remaining flavors- and arugula- together in terrific balance. Simply put, this is quite a delicious dish that will satiate any meat lover. Come to Church Street Tavern for the cocktails certainly, but make sure you stay put for the “Tavern Burger.”

When to Visit – Happy hour is a great bet at any bar but with $1 oysters every day of the week until 7pm and wines at just $6, sneak in early to make the most of the evening. Wednesdays also offer Happy Hour pricing all evening long, so circle hump day and head on over.

Value - Church Street Tavern’s cocktail list while vast, also ain’t cheap with most drinks sitting in the $15-$16 range. But such is the area- you are fairly close to Wall Street after all. It’s probably best to grab one or two of their cocktails before moving over to something more palatable on the old wallet. Or stick to their Happy Hours where some prices drop down to just $8 per.

The Lowdown – With their “Tavern Burger,” Church Street Tavern has managed to concoct a dish worth traveling for. And as New Yorkers have shown over the years, they’ll head to different boroughs and even cities if the food makes it worth their while. Fortunately, the burger here does live up to much of its buzz and indulging in some of the bar’s delicious cocktails while waiting for its preparation is a treat in and of itself. Tribeca’s got some of the highest end restaurants in all of Manhattan- and now, it’s also got an approachable place that delivers great value without a hint of pretentiousness.