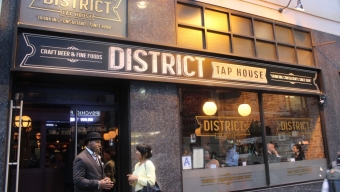 Our correspondent vowed to have a drink at every single bar in Hoboken and did so successfully with Spirits in the Sixth Borough. Every Friday morning, we’ll pick up where he left off, showing you distinctive bars in each New York City borough perhaps for the very first time, perhaps to refresh your memory of a fun place you’ve ducked into, or perhaps to suggest a new spot for you to check out as you gear up for the weekend. You can follow our sudsy travels every week with LocalBozo.com’s “Drink Here Now.”

For years the dearth of relevant bars around commuter hubs like Penn Station and the Port Authority Bus Terminal had plagued the Midtown West area with uninspired watering holes- places usually visited out of circumstance than out of desire. Fortunately newly opened area bars have breathed some new life into the otherwise tired area and leading the pack is the District Tap House, a January opening that’s made the neighborhood a destination worth frequenting for its inventive menu, compelling beer list and some seasonal cocktails that would make far more pretentious joints of that ilk entirely jealous.

District Tap House is a restaurant and bar split into two distinctive components. Just inside the spacious setting’s front doors lies the confines of a modernized American gastropub, outlined with rich dark colored wood, exposed brick and eye catching orbs that dangle down from the place’s ceiling to shine a bit of light on the room. Plenty of light also meanders in from the windows looking out toward 38th Street coupled with the glare reflecting from the big screens hanging above the bar to light up the casual and comfortable bar setting. The back of the space is what makes the Tap House really intriguing though. Earmarked as The Vig, the place’s second component acts as a fully functioning, if not stand-alone cocktail bar. Traditionally authentic with a progressive cocktail program, the smallish area is both intimate and interesting where a variety of seasonally inspired drinks like the “Fall Old Fashioned” ($12) with a sprehical green apple and ginger ice cube and the mint-forward “Midtown 75″ ($12) while reasonably priced, are just delicious.

Where District Tap House really exceeds though is their expansive menu. With fifty different beers on tap alongside another ninety in bottles and cans, the bar is perhaps the most diverse to open in New York City in some time. Though having a selection is certainly great, beer lovers should be up for the challenge of parsing down their decisions to just a few- from Ommegang to Lindemans, Blue Point to Anchor Steam, Goose Island to Duvel…you get the picture. There are a ton of beers here. Even more impressive? Craft cocktails. Consistency breeds return business and nothing is worse than a watered down, overpriced drinks. Well $11 gets you your choice of a “District Julip” or a “District Mule”- refreshingly tasty, filled with booze, and kind on the wallet- all without having to wait more than a few moments for them to be poured from a tap. And don’t even get us started on the list of spirits from Rum to Rye which takes up a full page of legal sized paper in size 8 font!

The food menu here is eclectic and meshes ideally into the bar’s fabric. While slugging down pours of craft beer, you’ll want to pick at some of the American style tapas fare like the sweet and salty “Bacon Wrapped Dates” ($4) or the “Shrimp & Chorizo Skewers” ($11), served with fresh avocado and cilantro. Heartier fare like “Baby Back Ribs” ($12) and “PEI Mussels” ($14) are also available- alongside an uber-affordable $12 “District Burger” should the mood strike you. But nothing here exceeds $17- an important piece of the puzzle since it’s become a challenge to be wined and dined near Madison Square Garden on any sort of budget- and the array of dishes are surely suitable for even the most finicky of eaters.

When to Visit – District Tap House suits itself to a variety of different drinkers, but Happy Hour is a can’t miss time to stop in. There’s the after work bustle mixed with the utter relief of winding down after a long day with a vast selection of beers and cocktails literally at your finger tips.

Value - With cocktails competitively priced (and exceedingly delicious) at just $11 or $12, you’ll slug down (or sip on) a few before you realize what hit you. The craft beers are priced just as you’d expect, but the Tap House doesn’t gorge you for a $10 beer that isn’t worthwhile so the choice to drop $6 on a Bud Light or $4 on a can of PBR is up to you.

The Lowdown – Man has the city been needing a place like this. That’s the only sentiment that came to mind as I sipped and slurped my way through some of the cocktails and dishes at the District Tap House. The Garment District is hardly known for its nightlife, but the barren streets seem to shine a little bit brighter now based on the quality of the newly opened bar/restaurant. Reasonably priced and casual, diverse and eclectic, fun and casual- the place is certainly a boon to an area that’s been in dire need of one. We’re just glad that we found it- and my advice is that you ‘drink here now.’