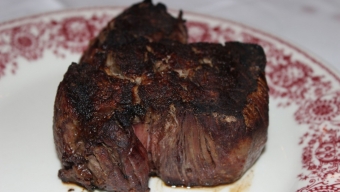 The 1985 murder of Paul Castellano outside of Sparks Steak House has been both a blessing and a curse for the restaurant in the ensuing years. On on hand, there’s the folklore that is associated with the tragically ordered hit which brings out touristy folks solely looking to relive a piece of a real life New York City murder. On the other hand, the back story often overshadows the experience of dining at one of Manhattan’s last remaining real steakhouses- a macho, throwback style relic where men can be men- ordering massive hunks of meat, drinking expensive wines and living out their interpretation of the American dream.

The New York City steakhouse is an experience like none other. It’s an eating exercise in opulence and gluttony in decorated fashion. But as many of the old world steakhouses continue to shutter, it’s places like Sparks which are to be celebrated for its sheer authenticity. Inside, everything seems grandiose. The spacious bar area is divided from the restaurant and plush dining room, where old wooden chairs surround big circular tables, tall pieces of mahogany furniture act as partitions between tables, and old-fashioned paintings sit all around the massive room on the if-they-could-only-talk walls. Once seated, the exquisite and pricey wine list (you won’t find a bottle under $50) is immediately attention grabbing, despite a cavalcade of older servers dishing out trays of charred fare around the dining area.

Ask any New Yorker about the City’s finest steakhouse and you’re likely to hear different answers each time but the most fundamental difference about the menu at Sparks is that you won’t find the traditional porterhouse or ribeye offered anywhere. In lieu of these more widely found cuts, Sparks serves up dishes like “Steak Fromage” ($44.95, topped with roquefort cheese) and a “Sliced Steak” ($41.95, served with bordelaise sauce and mushrooms), at which steak-purists might initially scoff. But despite a menu rife with dishes for non-carnivores which ranges from “Large Live Lobsters” (a whopping 5.5 lbs!) to a cavalcade of fish prepared to order, it’s perhaps the more classic fare that Sparks actually prepares best, with little decor and a tremendous amount of flavor.

Eschewing some of the traditional starters like “Fresh Bufala Mozzarella with Sliced Tomato” ($16.95) or the “Shrimp Cocktail” ($20.95), we instead opt for some warmed up fare and the serving dish of “Lump Crab Meat & Bay Scallops” ($26.95) perfectly hits the spot. The small serving was sufficiently sized for our party, divided up and served to each of us by our overly attentive waiter. The barely seasoned deliciously buttery seafood combination was plated with a fresh lemon wedge but each warm succulent piece of freshly pulled crab meat surrounding soft bite sized scallops didn’t need any additional flavor; the dish was scrumptious on its own.

Before going in, we’d heard the gripes of steaks being overcooked and while our “Prime Sirloin Steak” ($49.95) may have been just ‘a touch’ too dark for medium-rare, it was just about perfect in both taste and texture. The long, thick hunk of meat is the restaurant’s signature steak and was exceptionally charred and seasoned in textbook fashion. There was minimal fat on the otherwise tender cut which in taste alone was barely superior to the rare, thick serving of “Filet Mignon” ($49.95) served to the rest of our party. The cool red center was prepared in ideal fashion, melting with each savory chew and bursting with that delicious juice that is often associated with premium meats.  Candidly put, these steaks undoubtedly belong in the same conversation with any of the City’s finest.  The cuts were generously portioned and were quite filling despite being complemented by the servings of “Creamed Spinach” ($10.95), “Hash Brown Potatoes” (9.95) and “Sauteed Mushrooms” ($11.95)- fairly requisite side vegetables of which the crunchy, starchy potatoes were the standouts.

New Yorkers can often be critical (shocker!) of steakhouse fare, particularly because most of us aren’t financially equipped for routine or repeat visits. When you expect to revel in a special experience and are somehow underwhelmed, critiquing is often exacerbated based upon the excessive dough you’ve just shelled out to be disappointed. Pleasantly, Sparks Steak House managed to deliver a fantastic dining experience from the moment we found our table. The outstanding level of attentive service was only outshined by the surprisingly delicious cuts of steak that we polished off in record time. During our outing, Sparks managed to avoid the many pitfalls that others have critiqued, ones which have unfortunately besmirched an otherwise good-standing reputation. From the folklore to the service, the steaks to the ambiance, we’re happy to report that Sparks continues to be a strong performing steakhouse that transports its high end, meat loving clientele back to an old New York City that no longer exists on the outside.