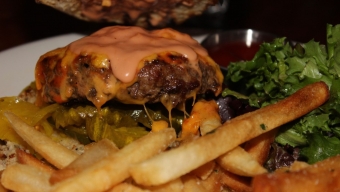 Summer’s steamiest evening was not the ideal time to grab a reservation at a place without a working air conditioner. And yet, that’s where we found ourselves unbenownst to us prior- wiping sweat from our brows and cheeks as we scarfed down some comfort food at Chef Marc Murphy’s West Village outpost of Ditch Plains. The AC was slated to be fixed just days after our arrival, a comforting sentiment in an otherwise uncomfortable setting, appeased only by repeat pours of Brooklyn Brewery “Summer Ale” at $8 a clip. But the atmosphere at a restaurant only goes as far as the food being served and in a City where folks are perfectly content to wait two full hours to sit in a cramped table when the fare is worthy, making sacrifices is often a part of dining out and with that in mind, we were willing to give Chef Murphy the benefit of the doubt.

Ditch Plains is neither a new restaurant or is it conceptually novel with its array of deep fried fare and a menu that heavily relies on burgers and dogs as its house staples. Comparatively, it is far more approachable and relaxed than the other restaurants under Murphy’s umbrella- namely the dual locations of Landmarc and the newer Kingside which is housed in the Viceroy Hotel.  The small eatery is earmarked by a casual dozen seat bar, backed by three rows of wine bottles surrounding two sufficiently sized TVs to satisfy those with even a passing interest in sporting events. Rustic wooden booths line the interior of the sparsely decorated, dimly lit corner restaurant space which brings in some nice natural light through it’s modernized glass laden exterior in daytime hours.

With the temperature inside a constant shadow over our party all evening, sipping on a “Spicy Corona” ($10) may have been a poor choice. The blend of beer, tequila, Tabasco and salt, while flavorful, was a fiery mix and only added to the previously existing napkin-to-forehead dabbing at our table. Aside from nibbling on some salads, health conscious eaters might find the Ditch Plains menu to be a bit of a challenge evidenced by a selection of starter options which included the likes of some seasoned deep fried “Jalapeno + Cheddar Tater Tots” ($11) and an order of serviceable “Fried Calamari” ($12). The tots were soft and bulbous with a crisp exterior akin to a zeppole, yet filled with a green pepper that wasn’t overly spicy. The tender “Chicken Meatballs” ($13) were far superior though, doused in a fresh orange colored tomato sauce and topped with shaves of pecorino and sage. The capers here were a nice touch, adding another facet of salty seasoning to the otherwise flavorful spheres.

Eventgoers will surely recognize the restaurant’s trademark “Ditch Dog” ($16), a thick juicy hot dog topped with gooey macaroni and cheese, often doled out at food tastings all over town. Served over a generous portion of better than expected French fries, the Ditch and the “Sloppy Dog” ($16)- as you’d imagine, it’s a bed of beef smothering the bun- were expectedly rich, with the variety of textures and flavors working well together. Chef Murphy’s burgers though were somewhat less impressive. Priced between $16-$20, we anticipated a more sizable serving from the four choice selection and perhaps worse, they were each served overcooked. Nevertheless, the accoutrement on each burger deflected some of the attention away from the medium well patty. Though the smoked slaw and aioli topped “Smokin’ Good Burger” ($18) was tasty in its own right, we preferred “The Big Marc” ($18), topped with an aioli-meets-ketchup-meets vodka (‘spiked ketchup’) spread. The “Sesame Crusted Tuna Burger,” absolutely lacquered in a creamy avocado and jalapeno aioli may have been the signature dish here, but at its diminutive size and bloated price ($20), we found ourselves gobbling up any remaining fries at the table to ensure that we’d leave satiated.

The staff, equally as glistening as our party, did their best to accommodate us in spite of the circumstances- but with the heat continuing to rise during the course of our meal, remaining in positive spirits proved demanding. In light of our situation, it would have taken a perfect performance from Ditch Plains to have been given a pass during our visit, but fundamental errors like the overcooked temperature of our burgers and their inability to serve us our cold bottled beer of choice because a new case had just been opened, continued to mar an evening that was seemingly hexed from the get go. Some sacrifices you are often willing to stomach, but others you simply can’t excuse.