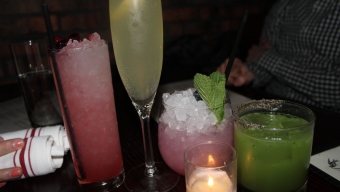 Roundly lauded as the saving grace to a neighborhood bereft of notable cocktail bars, Jbird‘s arrival was met with much anticipation from a community seemingly desperate for an alternative to a sticky floored sports bar. The relatively quiet 75th Street location is an ideal respite from much of the uptown fracas- so much so that you might have trouble finding the place because of its camouflage into the surrounding buildings. Though our purpose was sipping on some of Jbird’s much ballyhooed cocktails, we also ran the gamut of their many dishes with decidedly mixed results.

Amid the dimly lit, sultry setting, Jbird’s bar is immediately the focal point. Most if not all of the seats are occupied upon our arrival, which isn’t much of a concern as we’ve planned to grab a table- but keep in mind, because these types of haunts don’t exist on every block on the Upper East Side, seating can often be difficult to come by. Just behind the main bar area, the space expands to a larger dining area, hardly touched by much decor. The clean white walls are shiny though barren, but with the soft overhead lighting and candles atop each table, guests can focus on the more important elements of dining out- the food, the drink and the company.

At Jbird, the cocktail program was established by an all-star team of mixology masters from Death & Co. (Jason Littrell) and 1534 (Marshall Altier) who have concocted a six page drink list that is both vast and quite good. More importantly though, Jbird doesn’t necessarily gouge their guests on price as most of the cocktails are offered right at $12, where beers ($7) and wines ($9-$12) are similarly in line. The purple “Jbird Swizzle” ($13) is perhaps the place’s signature drink but we far preferred the “Blue Bird on My Bramble” ($12), a bit of an oddly named cocktail for a masculine man to order with confidence- but refreshingly tasty nonetheless. More than subtle hints of lemon bring out the summery vibe of the icy drink based around dry gin- not as seasonal as the ice cold “Moscow Mutt” ($12) spliced with blueberry syrup and ginger, but really delicious as a stand alone. The “White Wedding” ($12) meanwhile, inventively infuses white whiskey and chamomile with sparkling wine and a splash of simple syrup fittingly in a flute for the more refined and classy drinker, i.e. lady.

Though our favorite cocktail was the “Pepino” ($12) which provided an ample kick alongside its fresh cucumber and celery bitters, there wasn’t one drink that we tried – and we sipped upon many- that wasn’t a notable addition to the drink list. Unfortunately, where the train comes off the rails is with some of the accompanying fare being dished out from the kitchen that’s about as appetizing as something we’d be able to cook up from the frozen foods aisle. The menu is said to change seasonally, but ‘Bar Bites’ during our visit like the “Tater Tots” ($6) and “Smoke Gouda Mac & Cheese Bites” ($11) offered little aside from a greasy texture and the flavor of what could have been deep fried ‘anything.’ Same goes for the middling starters like the “Spinach and Artichoke Dip” ($10) where the bowl of chips was incredibly stingy for that lofty sticker price.

Notably, the dishes did get better as the courses continued to be delivered. The “Seared Sesame Tuna” ($16) in balsamic reduction was serviceable- the cucumber wasabi drizzle was a nice touch here. The star of the meal though was the “‘KFC’ Korean-Fried-Chicken” ($13) which was lacquered in deliciously sweet and sticky barbecue sauce. We licked every morsel of the brown stuff from our fingers as a touch of spice kicked up toward the back of our throats. Though we could have used more than the spoonful of the side of Asian slaw, the bulbous wings were meaty and delicious- ones that we’d put up against any variety uptown.

Though the arrival of The Penrose has certainly tempered some of the excitement around Jbird, let’s not just dismiss the Upper East Side haunt entirely for being passe. Not only can you avoid the construction of a certain Second Avenue subway here, but the cocktails and ambiance are quite noteworthy, especially for folks in the neighborhood. Though the food is middle-of-the-road, Jbird is a quintessential spot for either pre or post dinner drinks in the area or as a weekend destination should you want to class things up a bit because after all, you can’t wear that Jets jersey everywhere.

For the Fork
Seared Sesame Tuna ($16)