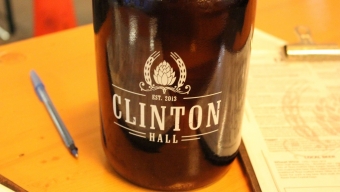 Our correspondent vowed to have a drink at every single bar in Hoboken and did so successfully with Spirits in the Sixth Borough.Â  Every Friday morning, we’ll pick up where he left off, showing you distinctive bars in each New York City borough perhaps for the very first time, perhaps to refresh your memory of a fun place youâ€™ve ducked into, or perhaps to suggest a new spot for you to check out as you gear up for the weekend. You can follow our sudsy travels every week with LocalBozo.comâ€™s â€œDrink Here Now.â€

2013 was a particularly strong year for beer garden openings in New York City and perhaps the part of town most desperate for one finally saw its wish granted. Clinton Hall brings a much welcomed alternative to the usual Stone Street centric scene, with more than twenty rotating beers on tap to appease the downtown suits. Coupled with a nice outdoor area on a relatively remote street, Clinton Hall offers a festive atmosphere that will last long after the place’s new-ness wears off.

The hours after work are certainly when you want to be checking out Clinton Hall, a sentiment that rings true for the entire Financial District actually. The outdoor communal tables are set up beer garden style, but amid the street side setting, the place exudes a fairly rustic feel underneath white Radeberger umbrellas. Fortunately there are heatlamps as well to entice high profile clientele in warmer months- but on this temperate evening and as summer approaches- that’s of no concern to us. Inside, the space is dark- lit up by flat screen televisions and overhead bulbs shining on the much nicer, darker tables that sit in the Hall’s main facility. The exposed brick behind the bar is sandwiched between reflective mirrors that list the many draught beers, poured to a typically fully occupied twenty seat bar.

As you might expect, beer prices here are hardly competitive. After all, it is a beer garden. But that said, there’s a good variety of styles and you’re likely to taste something entirely new. During our visit, I sipped on some familiar brews like a $14 liter of Radeberger and some half-liters of Weihenstephan ($8), a nice seasonal hefeweizen. Clinton Hall’s real value though lies inside of their “Keg O’Doom,” the remainder of whatever keg they’ve got laying around, which is priced at just $5. And if you’re adventurous enough to taste it and you’re able to guess the keg, the place sets you up with a free one. Fortunately, we grabbed some pours of the “Bronx Brewery Summer Ale,” unbeknownst to me- and a pleasant surprise indeed. For as many hours as I’ve spent toasting $7 Bud Light bottles on Stone Street, my first visit to Clinton Hall was a refreshing one in the area. It’s a perfect middle ground for PATH travelers and New Yorkers, an alternative to the scene on Stone Street, and is easier to get re-acclimated into city life than a walk to the Battery Park City nowhere land would leave you. But best of all- it’s just a really good beer garden to have in Manhattan.

When to Visit â€“ If you’re in the Financial District on a weekend, you either live in the area or it’s for someone’s birthday. Your bread and butter down there is after work. And it’s always going to be buzzing at Clinton Hall from 6pm on whether on game night or during a routine Happy Hour.

Value - Though much of the desired beer list is certainly not cheap, their $5 “Keg O’Doom” specials for mystery beers are priced at solid value. Unless of course you get a sour style, which frankly, nobody likes. To further entice you, stop into Clinton Hall on a Tuesday until 7pm all summer long for 25% the bill….for parties under 8.

The Lowdown – Despite having been opened since 2013, it took me far too long to trek down to FiDi to check out Clinton Hall. Maybe all I needed was some warm weather and sunshine, but whatever the case, it’s a beer garden that is worth the trip. The vibe is fun whether indoors or outdoors and it’s a professional space that never takes itself too seriously. And since all trains intersect nearby, it’s a breeze getting to either the east or west side once you’ve had way too much German beer and you need to head home. So the next time you’re thinking of a cool, new-ish bar to check out with some buds, smash together your big liter glasses at Clinton Hall, a noteworthy addition to an increasingly growing beer garden scene.