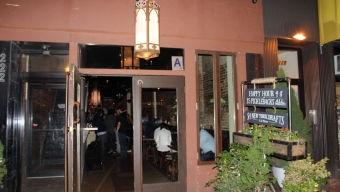 The down to earth, old-fashioned feel at the East Village haunt The Belfry is evident long before we enter the place’s inside. Long before we find a place that’s jam packed with a young crowd. Long before we find a seat inside of the dimly lit setting, surrounded by old exposed brick, dated candelabras and candle lighting along the walls. From the outside though, the place is certainly buzzing. A live but young five piece jazz band is pumping out some sultry tunes that draw us further inside curiously, in our very first visit to this tucked away neighborhood gem.

It’s roughly 9:30pm on a weeknight and The Belfry is particularly mobbed. Though seats are hard to come by, a long countertop which extends from the brick wall opposite the bar is sufficient for our small group to get comfortable. While space is certainly narrow, the setup inside is fairly impressive. The bar is backed by close to 20 draught beer taps, an endless supply of liquor bottles and an alternating array of laid brick, mirrors and light fixtures descending from the ceiling. We arrive just as the live band is packing up their gear, but the frenzy of energy inside The Belfry hardly skips a beat and the bartenders continue to hustle in slinging out their affordably priced cocktails from the “Moscow Mule” ($11) to their inventive Michelada style drink “The Fixings” ($6) made with worchesterchire and hot sauce.

The Belfry’s beer list is also no joke where Guinness and Magic Hat #9 sit beside the likes of “Blueberry Wheat,” “Benediktiner,” and two selections from Bell’s to name a few. Moreover, with five (5!!) different styles of “Pickleback” shots, ranging from $5 to $9, you’ll be smelling like brine and garlic practically all evening long. Fortunately for us, we arrive just in time for $4 New York draughts and grab a couple of pours of “Allagash White,” a perfectly seasonal refresher to sandwich our pours of old standby- Hendrick’s Gin, club soda and muddled cucumber. From there on out, it was about making conversation, watching people and toasting to ourselves and to the bar owners for allowing us to stumble into another solid local haunt.

Bar Type - A cool, quirky bar with plenty of beer, wine, cocktails and character to keep your party humming throughout the night.

When to Visit – The area here is always bound to be busy and much like The Winslow just across the street, you can and should visit on virtually any night of the week. There are plenty of interactive things going on – plenty of Trivia Nights for instance, but the beauty of The Belfry is that you can drop in for a first drink, a last drink, or to stick around and drink all night long. Like The Winslow though, you won’t catch any sports games here, so you’d be best served in dropping by on a night where you’re looking to meet people. And no, you should not wear your Mets jersey either.

Value - Specials are hardly few and far between here between $5 “Picklebacks,” discounts on local brews and competitively priced cocktails every single day. I didn’t say we like spending $11 a drink, I just said that it’s less than $14.

The Lowdown – Though the place has been open for a few years now, finding The Belfry ranks among the quintessential reasons why I began writing in this space so many moons ago. Like many of us, I’ve run in and out of dingy, poorly run, slop-holes in the East Village- not many of which I’ve returned to, save for a forced birthday party here or there. The older I’ve gotten though, I’ve learned to appreciate a place that does many of the little things well and offers up more than just an icy bottle of domestic light beer at a $7 clip. Today, there are several very solid bars in the surrounding vicinity of the area and The Belfry becomes the latest on our short list of recommends of spots where you should ‘Drink Here Now.’ And ‘Thank Us Later.’