Mariano Rivera Among Honorees at BBBS of NYC ‘Sidewalks’ Gala 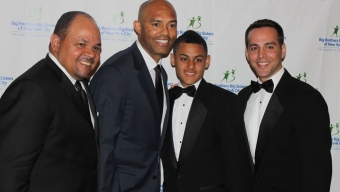 More than 3,600 underprivileged children are helped each year by the charitable efforts of Big Brothers Big Sisters of New York City. Though we’ve extolled the incredible virtues of the nonprofit group time and time again in this space, their mission of providing mentoring and one-to-one assistance for children and students in low income housing is both inspiring and imperative to some of America’s future leaders that otherwise wouldn’t have a chance. The organization once again brought the pageantry of their annual “Sidewalks of New York” awards dinner to the luxury of the Waldorf Astoria New York in midtown for another unforgettable evening of fundraising and outright motivation.

These aren’t your everyday kids that are in need of some extra support. Close to 100% of the participating children are considered ‘at-risk’ youths and come from low income homes, which makes the spectrum of folks that volunteer their considerably limited time that much more incredible. Tuesday evening’s gala alone would raise upwards of $2 million for Big Brothers Big Sisters of New York City, a testament to the dedication of the many corporate sponsors and celebrity guests that support the organization year after year. 2014 would be no exception with former CNN journalist and CEO of Starfish Media Group, Soledad O’Brien returning to pace the program as Mistress of Ceremonies, NFL Commissioner Roger Goodell spotted in the audience and legendary New York Yankees pitcher Mariano Rivera, considered the guest of honor on this night.

Following a jam packed cocktail hour which allowed guests to chit-chat inside of the two ritzy ballrooms, the evening’s ceremonies promptly kicked off with O’Brien, who was as eloquent and articulate as ever.   She welcomed BBBS of NYC President Jonathan Bram and CEO Hector Batista to the stage, both of whom took time to express their gratitude to the attendees and stress the gravity of the evening’s purpose. The most compelling portions of the evening at these awards are typically the presentations from a ‘big’ and a ‘little’ to each honoree and this year’s were no different.

After pausing briefly to enjoy the Waldorf’s tasty three course dinner, the program resumed by welcoming three inspiring matches to the podium to introduce the evening’s award winners- Nickelodeon (Corporate Award, accepted by Cyma Zarghami, President), Raymond J. McGuire (Citibank, Public Service Award), whose sermonizing speech was funny, poignant and inspirational and of course, Mariano Rivera (Sports Award), who was genuinely delighted to be honored in such fashion, stressing the importance of schooling and hard work, especially when coming from such humble beginnings.

For whatever reason, the 2014 “Sidewalks of New York” event seemed to really move quickly and just as it seemed that she arrived, O’Brien returned to thank the room filled with high profile guests for attending and send everyone home, feeling a little bit better about themselves for having been involved in such a memorable affair. Though the “Sidewalks of New York” dinner has now concluded, there’s no reason not to explore some of the tremendous efforts being put forth by Big Brothers Big Sisters of New York City. Whether you’ve got time to spare by mentoring youths or you have the financial capacity to make a donation to the cause, no matter how small, just giving their organization some real consideration can be your good deed for the day.