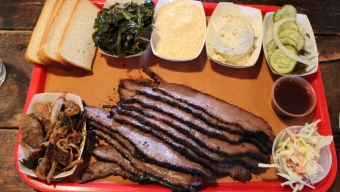 Just down the block from Williamsburg’s Brooklyn Brewery sits Mable’s Smokehouse & Banquet Hall, a sprawling space that is welcoming and laced with energy. The festive vibe kicks in almost immediately as you are surrounded with a layout that can accommodate families or large parties and a sizable bar that becomes the focal point of the restaurant upon entering.  But there’s no pretension here- just grab a pitcher, kick back and relax.

As has become customary in the New York City barbecue game, the food here is served at the front counter where guests are handed a tray and tasked with finding some available seating at some of the many large format communal tables set up in the dining room. The walls, fittingly, are sprayed by just the right amount of kick-knacks that you’d expect to find in as casual a place- taxidermy, sports pennants, an American flag – all colorfully eye catching set amid the backdrop of rustic wood paneled walls and industrial-like exposed brick. There’s not an overabundance of decor here which furthers the southern style flare that Mable’s exudes and keeps the interior rather tasteful for a barbecue joint. Though the place certainly feels like it’s been open for years, the husband and wife team opened shop in 2011 and with the expansion for lunch and brunch service, it seems the restaurant is just now hitting its stride.

Ducking in on a weekend afternoon, we ponied up to the front counter for a look at the different meaty offerings being sliced and served. Mable’s “DeLuxe Platter” ($32.95) seemed to be ideal for our small group with a tray encompassed by three different meats and three sides at our discretion. Though the space here is huge, the menu is not with the requisite ribs, sausage, pork and brisket taking up the entirety of your options. We began by doubling up on their “Beef Brisket,” tender but certainly not lean marbled slices which were a bit fatty and surprisingly dry for our liking. Fortunately, Mable’s offers up some truly outstanding barbecue sauce which can make anything taste delicious. The piping hot cuts of meat meshing with the tang of the cold red sauce were just fine- but nothing to write home about unfortunately. The “Pulled Pork” on the other hand was served just right. Lacquered in the same sauce, each warm and salty morsel was utterly delectable, evidenced by the fact that we ran out of the pork quickly and completely. The sides of “Bet’s Best Potato Salad,” grits and collared greens although fairly small, were more than serviceable here, with the greens being the standout of the trio. But we doused some more of the sauce on the remaining helpings of white Wonder Bread and around the plate of pickles that remained, before leaving the messy tray in front of us empty.

With a preponderance of barbecue experts popping up their own joints all over town, Mable’s can match any of them with the size and feel of a classic ‘cue inspired haunt and as an approachable relaxed alternative, it’s a place that’s just fine. For us though, the crux of the fare here falls a bit short of some of our other favorite barbecue spots to frequent despite the restaurant’s best efforts. But if you’re looking for a casual setting to load up on traditional and authentically cooked southern ‘cue and slug down some tasty draft beer, you could do far worse than grabbing a stool at Mable’s.