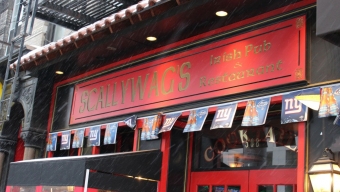 Our most recent bar escapades left us stranded leaving the Port Authority Bus Terminal, where there lies a true dearth of desirable boozy haunts on the surrounding streets. Fortunately though, Ninth Avenue is a different story altogether, where just a few blocks south we returned to a familiar place that I remembered having been inside during much drunker days. Scallywags is a bar and restaurant that is considered an old fashioned pub with decisively Irish and American inspiration. On this dreary winter day, the bar’s bright red signage was particularly eye-catching as our group trolled block after block and we immediately found a cozy respite inside.

Boasting a dozen or so flatscreen televisions and ample space, Scallywags is an ideal stop on gameday. But with snow falling outside, our focus was solely on seasonal beers and some hearty eats. We grabbed a seat at the bar and shot the breeze with the friendly bartender who doled out some frothy pints of Guinness as quickly as the slow pouring beer’s tap allowed. Though the place offers some solid Happy Hour specials – most of which are priced around $4 and $5 – and moderately priced brews during Syracuse games, we ignored the LandShark and Shock Top pints for the more traditional familiarity of the Guinness pour. An order of the thick and creamy “Spinach & Artichoke Dip” ($10) and their “Sriracha Lime Chicken Wings” ($12) nicely hit the spot as we washed down each bite with another big gulp.

Weekly, Scallywags hosts live music in its main space- mostly singer/songwriter types that play as a backdrop to your conversation behind the clanking of glasses, but there’s also open mic nights on Wednesdays that welcome your everyday neighbor up to the front of the room for an exercise in embarrassment. Although the place sort of fancies itself as a restaurant – and it’s perfectly serviceable as such – Scallywags is your neighborhood bar through and through and while its location makes it an ideal landing spot for commuters and locals, it’s also one that’s worth seeking out if you do find yourself in Hell’s Kitchen and you’re looking for a comfortable if not entirely typical Irish pub.

When to Visit – If you’re commuting, definitely stop here on your way back to whichever hub you’re traveling from. And if you find yourself here on a weekend, the prices are pretty reasonable and the surrounding residents and visitors all seem open to chatting.

Value - There are Happy Hour specials until 8pm virtually every night of the week and during Syracuse games. Between 8pm and midnight though, you’re paying full price bucko.

The Lowdown – If you live in an outer borough or far from the thralls of Hells Kitchen, Scallywags is hardly going to be your go to New York City bar. But there’s something to be said for a local place that embraces its surroundings and maintains the feel and the relative authenticity of a true Irish pub. Scallywags embodies the feeling of an ordinary place straight from the streets of Dublin, which makes so many of the imitators that try to capture that feeling in New York City that much more unremarkable. Good pub fare, affordable drink specials, comfortable setting: Scallywags, in a nut shell.