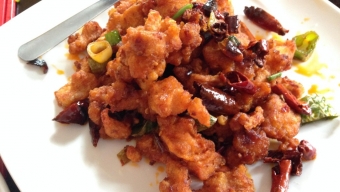 To those not in the know, the fall arrival of Sichuan style restaurant Han Dynasty was likely received as just another Chinese restaurant on an East Village street corner. But to dismiss it as such would be utterly ignorant to the restaurant’s lineage, what with five successful locales in the Philadelphia area and one actually just outside of the city limits in southern New Jersey. But with ample buzz and lengthy dinner time table waits which stretch outside the place’s red cold weather corridor and onto Third Avenue, even passersby are forced to take notice that something special is brewing inside of Han Dynasty, the first such Manhattan outpost of the Pennsylvania staple.

Whether you’re waiting for a table or you’re seated right away, there’s not much in the restaurant’s barren decor to keep you engaged. Instead, your eyes are drawn to the many tables and dishes buzzing all around you, the flurry of waiters weaving between the closely placed tables or the smoke rising from the unique looking hot pots shared amongst a given group. But more often than not, dining out for Chinese is rarely about the ambiance and the lack thereof here really allows guests to extend laser like focus on each dish.

Just about every line item on Han Dynasty’s expansive menu has a parenthetic bold red number which reveals not the number of dumplings in an order, but each selection’s level of spice, ranging from the mild (1) to the hot (10). While each order can be prepared more toward a guest’s liking, we’re of the opinion that one is to eat as the restaurant intends and as such, we left each item ordered without customization- at times to our tongue’s detriment. The chilled “Dan Dan Noodles” ($7.95) should be at the forefront of any order but be forewarned that they are considerably spicy if you are unprepared for them. Tasty strands of golden flour noodles are meshed with hunks of ground pork amid a bevy of Asian inspired ingredients from sesame paste to vegetable, peppercorn and chile oils and the resulting flavors are outstanding. You also can’t go wrong with either the “Wontons in Chili Oil” or the “Dumplings in Chili Oil,” both priced at $6.95. If pressed, we prefer the latter which delicately laid a handful of oversized soft dumplings stacked in a bowl saturated in tangy oil and sprinkled with ample sesame seeds. Flavorful without being spicy, each bite served up exactly what you would hope for from an expertly prepared dumpling.

The entree portion of the menu is reflective of the restaurant’s versatility with an array of different styles that cater to the appetites of each diner, who can mix and match cooking preparations with a protein to their liking. From the “Dry Pot Style” which utilizes a sizzling tabletop mini-wok to the “Pickled Chili Style” which incorporates leeks and hot peppers alongside the requisite chili oil, there are sixty different combinations of entrees from which to choose. Surprisingly, it was Han Dynasty’s “Black Bean Style Shrimp” ($18.95) that was an absolute home run for us. Bulbous jumbo shrimp comprised the main focus of the dish, but the subtly sweet thicker soy based sauce lacquered the bed of red and green peppers, onions and mushrooms brilliantly with a touch of Asian inspired authenticity that’s just not available at your run of the mill takeout restaurant. Equally as mouthwatering is the truly distinctive “Dry Pepper Style Chicken” ($13.95) which is among Han Dynasty’s most popular dishes. The presentation is artistically plated with dark red peppers and green scallion slices surrounding the soft chunks of popcorn-style chicken. Be forewarned, the dish ranks at a heat level of 8, so make sure to eschew the hot chili peppers where you can or have a glass of milk by your side. Served delectably dry (sounds funny, I know), each morsel packs a unique wallop of flavor where the spice creeps up after each bite. Though fried, there is minimal grease and though the health conscious eater may have a hard time falling asleep at night, the confluence of different flavors here add to the distinction of being among the restaurant’s finest creations. The admirable “Scallion Style Pork” ($11.95) more than held its own here, but proved inferior to the other two dishes, despite a preponderance of succulent hoisin and oyster sauce in this stir-fry setting.

Of the reports we’ve read, we were admittedly skeptical about our first foray into Han Dynasty. Rumors of a boisterous atmosphere, lengthy table waits and inconsistent fare had us scratching our heads as we sat immediately and thoroughly enjoyed each dish presented to us amid a festive and energetic weekend afternoon. We couldn’t have been more impressed by our initial trip to Han Dynasty, which in our estimation is Philadelphia’s greatest export since the cream cheese. Alright fine, the cheesesteak.