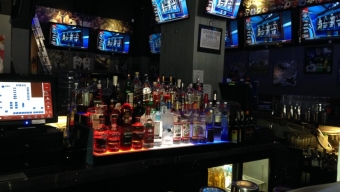 In a day and age where literally every place dubs itself a sports bar, newly opened Murray Hill haunt Bottomzup literally makes them all seem amateur. Spawned from an idea that combines the very best of tailgating with a bar that looks and feels like an ideal man cave, the space is rife with legendary likenesses of sports figures and flat screen televisions covering every inch of the place. But the sheer variety of food being offered- from its raw bar to its sushi rolls- make it a stand out spot where you can enjoy any game and eat pretty well too.

Bottomzup opened in New York City back in November, the second such haunt that shares the same name as its Carle Place, New York predecessor. The bar sports a whopping forty-five 60 inch televisions all over the place, which is probably the most eye catching spectacle that entices heavy street traffic- aside from the cartoonish bar sign that sits overhead on Third Avenue. With 3400 square feet, there’s nowhere for you to sit out of range of a slew of televisions showing a multitude of sports games through and through, with sound, which lends itself to a highly energetic stadium-like experience inside. Also, there are more than a dozen draught beers on tap here including some of the bigger craft breweries and about fifteen others in bottled form- all priced in the $5-$8 range.

Televisions aside, the star here is the top-to-bottomz menu, featuring the likes of six different wing sauces on the $10 “Buffalo Wings,” southern fare like the “Kansas City Rib Stacker” ($10) and “North Carolina Sweet Potato Fries” ($6), and a full sushi bar. The bar offers $5 drink specials three nights a week with solid Happy Hour deals until 7pm nightly as well as great specials on game day- but not unfortunately during the playoffs- which we learned the hard way. Beginning in February, the space expands to also include a bottomless brunch for $25 which includes one of their lip-smacking morning entrees, and which will hopefully expose some new folks to one of the City’s best new sports bars that proudly dons that badge of honor admirably.

When to Visit â€“ Game nights definitely. Tons of rowdy folks and game day sound played loudly in the bar.

Value - Happy Hour runs from just $4-7, but the values are pretty great for booze and food including $1 oysters and $2 sliders and $10 pitchers of light beer.

The Lowdown – We make a point to stop into newly opened bars so you can imagine our great fascination with Bottomzup, which combines everything we love about beer and sports in the same place as a staff of good looking girls to serve. The food here far exceeds what you’re likely to find at any traditional ‘sports bar’ and because of the neighborhood, there’s a good chance that waiting for tables will be a bit easier than some of its competitors. There aren’t many better sports bars in Murray Hill and dare I say the City because Bottomzup caters to men and women equally- even on game day.